Blake Burzell (30 points), Isaac Wulff (15 points) and Darin Richardson (10 points) were the players that kept Laguna in the game. The visitors went on an 11-0 run late in the second period to take the lead and a 15-0 run in the third quarter to ice the contest.

Laguna finished the season with the second best win total in school history and will be returning top scorer Blake Burzell (18.4 points per game average) plus three other players that saw considerable time this season for the 2017 campaign.

Last week, the playoffs began on Wednesday, Feb. 17, when Laguna defeated Covina 50-41 at Dugger Gym in the first meeting between the two schools in 77 years. Breakers had lost to the Colts 16-14 in overtime back in a 1939 tournament.

That set up a second round contest last Friday, Feb. 19, where Laguna traveled 278 miles to face 10th ranked Atascadero. The Greyhounds took the opening tip and delivered a pass to their 6’ 6” captain, Gabe Perry, for a stuff that gave the hosts their only lead of the evening. Breakers stormed back with Darin Richardson’s two three-point shots along with Isaac Wulff hitting his baskets, sending Laguna to a 19-6 first quarter advantage despite the hostile surroundings.

The crowd dynamics changed in the second period with the arrival of the Laguna baseball team, playing in nearby Santa Maria. The team drove the mere 50 miles to support the basketball squad. Their cheers and energy were a boost to the Breakers, who rolled to a 52-32 blowout victory. The trek mirrored Coach Bret Fleming’s first season 25 years ago when Laguna traveled 300 miles for a similar blowout playoff victory in Bishop.

Laguna was seeded 14th in their CIF division, which provided an easy initial round contest only to face off with one of the seeded teams in the ultra competitive D-4AA bracket.

As expected, the Breakers rolled La Puente 60-28 as Jackie Cenan and Alexandra Lewis were too quick and skilled for the visitors last Thursday, Feb. 18, in Dugger Gym. The victory was the 20th for the season, a new school record capping a great senior season for the scoring duo.

On Saturday, Feb. 20, at St Paul in Santa Fe Springs, the host fourth-ranked Swordsmen had the depth to wear down Laguna, pulling away near halftime and running the Breakers out of the gym in the second half.

Cenan finished the year with 540 points, 19.3 average with a career total of 1,661 points and a 18.1 scoring average. Her teammate, Alexandra Lewis set the school three-point shot record with 100 baskets this season and her career record of 261 long rangers is more than triple the next person on the all-time Laguna list. 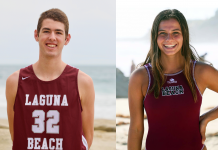 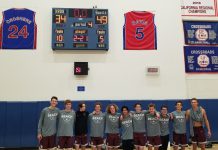 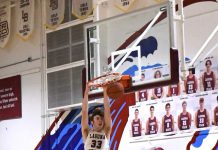