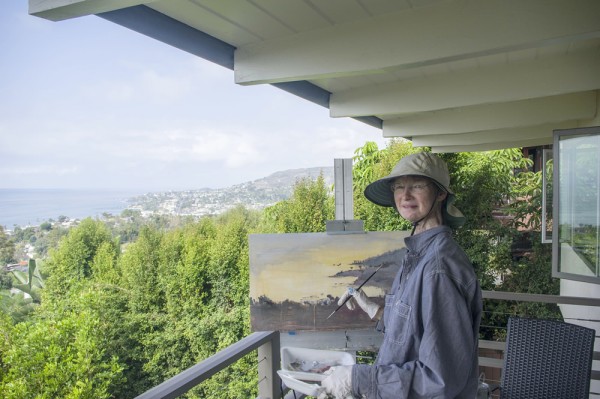 Her genre may be plein-air painting, but for April Raber that classification goes beyond bucolic meadows, mist-shrouded mountains and sunny beaches. Raber will think nothing of setting up her easel in the industrial wilds of Los Angeles, San Francisco or New York, immortalizing bridges, railroads, grain elevators and power plants, beams and angles and anything that fascinates her in places often overlooked.

Consequently, her paintings tend to be substantial with a near physical presence, as if to accommodate those massive man-made constructions, which she depicts with the skill of an accomplished painter while also evidencing a photographer’s eye for the interplay of light and shadow. “There is so much beauty around here,” said Raber, a 10–year Laguna Beach resident whose studio boasts a majestic view of the ocean. She is a member of the Laguna Plein-Air Painters Association and has exhibited her work at the Festival of Arts for the last 10 years.

Recently, she was close to finishing “Air and Iron,” an urbanscape focused on the underside of San Francisco’s Golden Gate Bridge. The oil painting will be on view at her Temple Hills area home-studio, part of the third annual free, self-guided Art Along the Coast Art Studio Tour. It features 12 artists between Laguna Beach and San Clemente on Saturday and Sunday, April 23 and 24, 10 a.m. to 6 p.m. and 11 a.m. to 5 p.m., respectively. An map and participating artists can be found at www.artalongthecoast.com .

Founding participant and mixed media artist Mia Moore said that this year’s tour is built on the success of the previous ones, which drew at least 100 guests that proved eager art buyers.

glass artist Sherry Salito-Forsen and Moore conceived the idea of showing their work in the off-season as a preview for visitors they expect to see during their summer stint at the Festival of Arts, explained Moore. Bond said that the group’s goal is to offer collectors and viewers an opportunity to discover how ideas, technique and creativity result in a work of art worth acquiring.

“We asked 12 people to take part every year but really had no expectation of the outcome,” said Moore. “The fabulous effect of the tours is that we are introducing new artists and clients to each other who later come and visit everyone come summer,” she said. As before, visitors will be able to sample refreshments and libations. “It’s an opportunity for people to get to know us in a more intimate way,” she added.

Raber is a tour newcomer. Her diverse body of work reflects her travels throughout the nation, her strength to conquer adversity and illness and her upbringing as the eldest of 10 children. “My parents designed and built their own house and furniture and we also made some of our own clothes. It was a life closely modeled on that of earlier pioneers,” recalled Rabe. “I helped my father lay brick,” she said.

Art-minded since early childhood, she earned a bachelor’s in art and design from Brigham Young University in Utah and began her artistic career as a designer of books and magazines.

As for the multitudinous presence of trains in her paintings, those were created during trips to Nevada and beyond where her engineer husband David enjoys driving trains as a hobby, she explained.