By Randy Kraft, Special to the Independent

Suzanne Redfearn writes novels the way she once shaped interiors. The former architect comes up with an idea, researches the essentials, and builds a plot.

With her first novel, “Hush Little Baby,” published in 2013, the domestic violence page-turner touched a nerve with many readers. Redfearn was moved by their letters and personal confessions and publisher Grand Central, an imprint of the global Hachette Book Group, jumped on the potential for a franchise about mothers protecting their children.

“I believe in the art of writing, but publishing is a business, and I’m thrilled to grab on to this and write what my editor wants,” Redfearn says.

Thus, her second novel “No Ordinary Life,” launching next week, depicts a mother and three children catapulted into the treacherous terrain of Hollywood.

In the eight years since Redfearn decided the construction downturn was an opportunity to pursue a longstanding interest in writing, she has also penned seven other novels with widely varied subjects from a day on the golf course to Christmas, but these are waiting in the wings until she is more firmly established.

Redfearn and husband Cary, the proprietor of Lumberyard Restaurant in Laguna Beach, were also the previous owners, and Suzanne the architect, of the now closed Oysters in Corona del Mar and Oceans 33 in Mission Viejo. She says that when she is at Lumberyard, she feels the same sort of accomplishment she feels when she sees her books in print.

“Hush Little Baby” was a thriller about a successful woman desperate to save her kids from a violent husband. In contrast, the children of “No Ordinary Life” face multiple but more benign threats from an opportunistic father, a manipulative director, a secretive casting agent, and a stalker. However, none are as perilous as their gullible, inept mother who is seduced from poverty when two of her three children become social media and television superstars. In the end, saving them is as much about saving herself.

Redfearn says she got the idea when she read about actor Zak Efron’s battle with addiction and other child stars and their parents’ struggle with the downside of fame.

“Stardom is worth a lot of money to a lot of people, and the welfare of the child can be superseded by greed,” she says.

Although state protection agencies regulate the number of hours on camera, and educational requirements on set, etc., the real dysfunction happens behind the scenes, Redfearn learned in her research.

Years ago, she wrote her first pages by hand in her car while waiting in the pickup lines at her kids’ schools. Her son and daughter are grown now, but Redfearn still prefers writing there.

Redfearn envisions her next novel as a “Thelma and Louise” with kids, but for now, she’s fielding blogger interviews and booking readings, with an invitation-only launch party at Lumberyard Restaurant Tuesday, Feb. 2, followed by a reading with authors Diane Haeger and Susan Meissner Saturday, Feb. 27, at 1 p.m. at Seaside Gallery in Newport Beach. 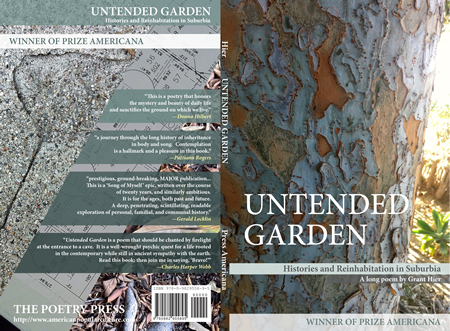 Grant Hier, chair of a Laguna College of Art and Design department, was nominated for both an American Book Award and the $10,000 Kate Tufts Discovery Award, says a statement from the school.

“Untended Garden — Histories and Reinhabitation in Suburbia,” Hier’s book-length poem was published by The Poetry Press last year and its author recently nominated for a Pushcart Prize.

Housden is the author of 23 books on poetry, art, and travel as pilgrimage. The class for non-writers, occasional writers and practiced writers costs $125.

Register with PayPal at www.rogerhousden.com and call Mary McManus with questions: 949-933-1783.