By Amy Orr, Special to the Independent

Even when she’s off campus, Jenny Salberg has Thurston Middle School on her mind. Now in her seventh year as principal, Salberg says school-related ideas often hit her at unexpected times. This summer, Salberg found herself suddenly struck by the phrase, “Be Thurston”. She shared the phrase with her staff and the theme grew from there.

The drive to “Be Thurston” ties into the school’s quest for continuous improvement. In recent years, Thurston has received accolades for its social and academic excellence. During the last round of California ratings in 2013, TMS was given a 10/10 state rank and an API score of 932/1000. In 2016, the California Positive Behavioral Interventions and Supports Coalition named Thurston as one of only 15 platinum level schools in the state, the highest level of recognition. Despite the school’s success, Salberg wants to keep raising the bar.

Salberg says “Be Thurston” is meant to challenge middle schoolers to be their best, as students and as community members. Giant sidewalk stickers and wall hangings throughout the school serve as visual reminders of this goal. 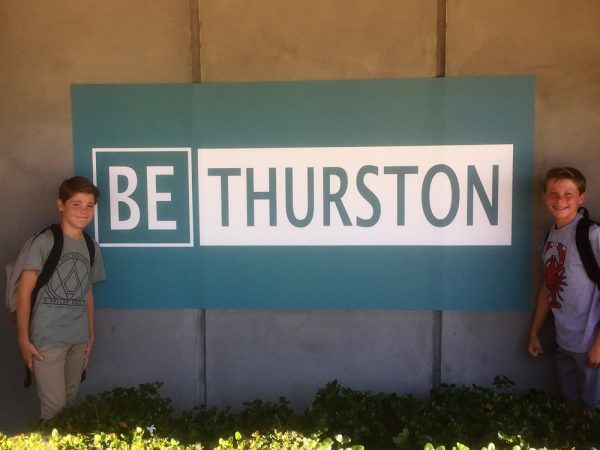 The slogan also appears in various other forms of printed media, from t-shirts to pencils and notebooks. Salberg says the words are worn with pride by students and staff, but she thinks the strongest manifestation of the phrase comes through the school’s public address system.

Traditionally, each school day starts with a message from the student body president. This year, two students share the presidency: twins Jack and Sam Arntz. The boys are relative newcomers to Laguna, having joined the district in seventh grade. They drew support by running together, citing siblings like Peyton and Eli Manning and Wilbur and Orville Wright in their brotherhood campaign.

According to Salberg, the Arntz boys are carrying the brotherhood mantle with pride and showing strong leadership. She describes the boys as “amazing, articulate, and creative.” Each day before the school’s morning message, she gives them a new word or a way to “Be Thurston.”

With only a few minutes to prepare, Salberg says the boys find wonderful ways to share examples of the daily phrase. When “Be Involved” was the phrase of the morning, Sam said he tried to offer a variety of suggestions. “I talked about students joining clubs, playing school sports, and really taking part in class discussions,” he said. “There are lots of different ways people can be involved at Thurston.”

Jack said he thinks students enjoy hearing positive phrases in the morning announcements. “I think they may like the messages better this year because they are longer and more in depth,” he said.

The brothers’ “on-air” talent may come naturally; their grandfather is Chuck Henry, co-anchor of NBC’s Southern California nightly news. They say they sometimes visit their “Papa” in the studio, especially when he is announcing a major sports story. Both boys are athletes and fans of multiple sports.

“I’ve always wanted to be a professional athlete,” says Sam, who loves playing basketball, baseball, tennis, and football. “If I don’t make it as a professional, I may want to be a broadcaster or an announcer for a sports team, like Vince Scully.” Jack, who plays football and golf, is also interested in sports broadcasting.

For now, the Arntz boys are enjoying their time as Thurston broadcasters. “I think the messages are helping a lot,” Sam says. Jack agrees, adding “people are really coming around to it.”

Although the opening phrase changes every morning, the boys sign off the same way each day. “After we finish the announcements, we say ‘We are better together – Be Thurston’,” says Jack.

County: Laguna Beach Has 22 Residents Who Tested Positive For The Coronavirus