Understanding and Addressing LGBT and Gender-Based Bullying is a month-long online course that begins July 14. It’s an opportunity for educators, school administrators, and parents to learn about issues related to transgender students as well California’s AB1266 that went into effect Jan. 1.

“The School Success and Opportunity Act goes some distance toward protecting transgender students and intersex students at school,” said Karyl Ketchum, Cal State Fullerton assistant professor in the Women & Gender Studies program and the driving force behind development of this class.

Participants will meet transgender students and their families through video discussions, and will hear success stories of schools that already comply with these new laws.

The fee is $210. Register through University Extended Education. For more information, go to http://extension.fullerton.edu/ProfessionalDevelopment/bullying or call 657 278-5836.

“Over the last decade, Mr. La Motte has been the driving force behind the successful establishment of effective teacher collaboration and classroom innovations that have served as examples to other schools,” said Fay. “His efforts have resulted in significant improvements in student learning, education culture, and community support and engagement.”

In recognition of this honor, a donation has been made in La Motte’s name to the California State PTA scholarship and grant program.

Robert Stefan Chew, son of Steven R. Chew (Pomona ’63) and Leslie Chew, graduated from Pomona College with a major in philosophy, politics and economics, and a minor in Spanish. Chew served as first-year class president, played on the water polo team for four years, was a member of the Sigma Tan fraternity, received the 2014 Politeia Prize, and was recognized by the philosophy, politics and economics department for writing the best PPE thesis of 2014.

Chloe Cunningham, daughter of Gary and Leslie Cunningham, graduated from Dickenson College, Carlisle, Pa. with a bachelor’s degree in art and art history. 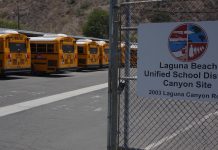 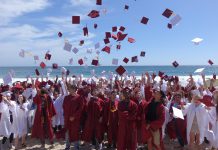