The Laguna Playhouse is slated for a major makeover this fall, thanks to recent city approvals of a building design that includes new colors, textures, and modern elements such as an angular origami pergola.

To commemorate the theater’s 50th anniversary, playhouse leaders presented a proposal earlier this year to refresh the 1960s building’s façade and add new signage and landscaping along Laguna Canyon Road.

Those plans were reviewed, and ultimately approved, by the city’s Planning Commission this summer, and the City Council unanimously signed off on Aug. 7.

With a green light from the city, playhouse officials say November will be the best—and likely only—time to carry out the renovations, which could cost at least $200,000, according to the project valuation submitted to the city.

Joe Hanauer, past chair of the playhouse board of trustees, told the Planning Commission in June that with 100,000 visitors and 330 performances each year, construction at the 18,793-square-foot playhouse will need to happen in a 10-day or two-week window in November, so that patrons can enjoy the theater’s Christmas show immediately afterwards.

The 1.3-acre property, which is owned by the city and leased to the Laguna Playhouse, was originally developed in 1968 as the Laguna-Moulton Playhouse. Today, the 404-seat theater provides year-round programming including comedies, dramas, musicals, stand-up comedy and family entertainment.

The playhouse was founded as a community theater in 1920 and is considered one of the oldest continuously operating theaters on the West Coast.

In 1985, an addition to the playhouse expanded the lobby and created a new rehearsal hall, a 68-seat balcony, and second floor offices and restrooms. While that expansion involved some exterior changes, the building largely retained its 1968 architectural style and characteristics.

Local architect Mark Abel was tapped by the playhouse board to design the building’s facelift. Abel, who has been working in town for 27 years, said the design includes: replacing existing textured stucco with a smooth stucco finish; lowering front screen walls; adding metal canopies; switching the building’s color palette to a custom taupe grey; and adding landscaping, new signage and a custom fabricated origami pergola with stainless steel mesh.

Abel said one of his goals was to build on the playhouse’s angular design and bring more of the structure’s geometry into view.

“The festival inspired me,” Abel said. “I wanted to come up with something worthy of being next door, with about a tenth of the budget.

“We took a tired building and brought it back to life,” he added. “A fresh face on an old friend known to all.” 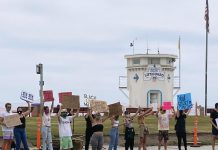