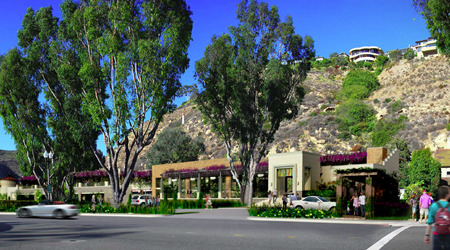 Before a packed house, the Laguna Beach City Council voted 4-1 Tuesday to step up community outreach on the disputed village entrance project and also approved funds for soil analysis and odor control at the sewer lift station within the project.

Even so, many residents expressed skepticism that city officials would consider their views even before the meeting began. About 30 people paraded in front of City Hall waving signs protesting the project’s size, scope and cost, and demanding a citywide vote on the issue before the session got underway. 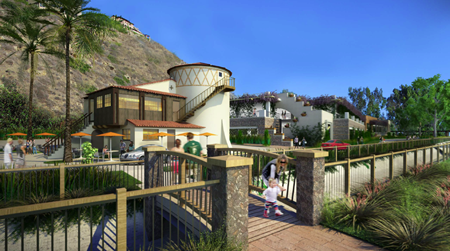 At the meeting, design firm Studio One Eleven presented preliminary concepts for the proposed $42 million pedestrian park and four-level parking structure at the corner of Forest Avenue and Laguna Canyon Road. Designer Alan Pullman said the plan followed the city’s dictate to design “a beautiful gateway” that would replace the existing surface parking adjacent to City Hall, as well as the metal sheds along the back of the property, with a creekside park and a 528-car parking structure, a net gain of 200 spaces when combined with some surface spaces that will remain.

Landscape architect Bob Borthwick described the creekside promenade’s design as intended to “restore some degree of friendliness” to the channelized creek. Artistic renderings showed a 12-foot wide promenade in a bucolic setting improved by native plants, dotted with sycamores and live oaks along with the existing eucalyptus trees. Cyclists could make use of a

bike trail set back from the road, and some meadow areas would provide space for art exhibits and other public events.

Engaged to renovate the 80-year-old digester building as part of the project, architect John Loomis called the K-rated historic structure a good candidate for restoration.  Built in the Mediterranean revival style popular at the time, he said it has stood the test of time and could be converted to a visitor center with restrooms or even a restaurant or art gallery, potentially becoming an iconic landmark at the beginning of Laguna Canyon Road, providing an inland counterpart to the Lifeguard Tower at Main Beach.

Pullman described a parking structure not exceeding the city’s 36-foot height limit, with most of it lower than City Hall’s roofline. Most cars would enter from Laguna Canyon Road at the existing signal outside the Festival of Arts’ grounds, with another entrance on Forest. He said he borrowed exterior design cues from the San Juan Capistrano train station garage and the Susi Q Senior Center with its stonework, pergolas and arcades.

While Pullman emphasized the design was conceptual, that issue became relevant later when opponents such as Charlotte Masarik questioned why the project’s outline had not been staked prior to the meeting. She said she doubted the Council’s sincerity in accepting feedback. “What happens if the majority seeks a smaller project or no project at all? Are you really willing to listen?” she asked. “We shall see, but this looks like a done deal to me.”

Mayor Pro Tem Elizabeth Pearson, who has been working with Council member Bob Whalen on refining the project and working out financing, disagreed. Staking the design presented Tuesday would have presumed it’s acceptance as final before receiving public input, said Pearson, making good on her previously announced intentions to solicit public input before the council finalized a decision.

In an effort to guide the ensuing hearing, Whalen insisted on the Council’s intention to include residents in the planning process for what is “essentially a beautification project.” He said that the project must move forward in some form as the current site, which he called unfriendly, ugly and lacking art is “not acceptable.”

The project must comply with a Coastal Commission requirement to replace visitor-serving parking spaces removed from the downtown. How to replace parking and whether to go beyond replacing the spaces is what remains in contention, said Whalen, who urged the audience to provide constructive criticism and to be open to views other than their own.

Resident Jacob Cherub, the first of 50 to speak on the issue, set the tone for many comments to follow.  “Things are out of order. Outreach should have come first,” he said.

As the evening wore on, the keyed up audience punctuated comments by speakers, whether residents or Council members, alternating cheering and applause with bursts of booing and catcalls, more than once eliciting rebukes for their rudeness from both Mayor Kelly Boyd and Council member Steve Dicterow.

Only 10 of the 50 taking the podium expressed general support for the project, with the remainder deriding all or parts of it.

Michele Hall, speaking for Laguna Beach Republicans, marveled that her group had formed an unlikely partnership with Laguna Democrats, Village Laguna, and other erstwhile rivals, in opposition to the project.

While Arnold Hano said that the public clearly supports an alternate parking structure in Laguna Canyon’s ACT V, Barbara Hoag questioned the need for a parking structure at all, saying the city needed to increase public transportation instead.

Some balked more at the cost and $29 million bond debt to help finance the $42 million project than the structure itself. Others, like Sam Goldstein preferred scrapping the project entirely in lieu of a comprehensive plan to improve parking, circulation and walkability for the entire city, not just the downtown.

Many insisted that before spending any large sum of money on any design residents should have the chance to vote on it.

Susan Elliott said she had been watching the proceedings on her computer at home until she heard one too many people say a “the majority” opposed the project. She hustled over to City Hall to counter that point. “I’m not against it at all,” she declared, telling the Council, “I voted for you. I like you. Keep going.”

And they did, emphasizing their willingness to bend to public opinion. “I have made no decision on what the final structure will be,” said Dicterow.

If the public only wants a park and doesn’t opt for a net increase in parking spaces so be it, Pearson said. Even so, the city must replace spaces lost to landscaping improvements. And if they don’t want a parking structure on the site, then where? “Help us come up with the other 143 spaces in this area, and we’ve reached an agreement,” she said.

Council member Toni Iseman dissented, remarking that she could not condone any action unless the concept was staked without further delay.

No Longer Waiting in the Wings, No Square Hires New Directors