Soon residents in the Top of the World neighborhood heading to the fire road and students ambling to their cars from the Laguna College of Art & Design may be treading new pathways.

The City Council paved the way for new paths this week, awarding a total of $155,500 for two design contracts to the engineering firm Stantec, about half for each project.

Residents of Arch Beach Heights and Top of the World have long bemoaned the informal and uneven section of footpath that connects the Top of the World side to the paved fire road, linking the two hilltop neighborhoods.

The public lost access to the end of the fire road to Top of the World when the private property there was developed in the mid 1980s. With the construction of the four Sommet Du Monde homes, which resulted in the road becoming a private, gated street, pedestrians were rerouted to the largely unimproved and sometimes treacherous dirt trails along an easement that skirts the properties.

Russ Watson, one of the 16 residents who spoke in favor of the new pathway this past Tuesday, recalled riding his bike as a youngster to Top of the World Elementary unimpeded on the paved fire road to a  public street. He decried that a private community was allowed to block access.

Many Arch Beach Heights parents would welcome similar access for children to walk or ride their bikes to school. “I can’t ride my bike up the hill,” attested TOW third grader Brandon Britt, referring to a steep incline on the dirt path that prevents him from riding his bike to school from his Arch Beach Heights home. 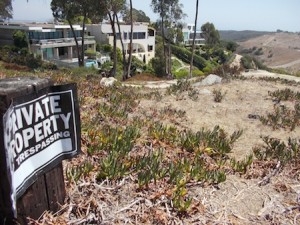 Though the trail is a short walk from her Chillon Way home, Top of the World resident Ellen Kempler drives to the Arch Beach Heights entrance to the fire road to avoid a nearly three-foot “step” at one point in the trail.

“Sommet Du Monde can’t have it both ways,” said resident Charlotte Masarik. “Either they support this pedestrian pathway or they open the gates.”

Last August, with $350,000 in the city coffers earmarked for the project, the council asked staff to investigate an alternative path with fewer obstacles, to negotiate easements with owners of the undeveloped property it crosses, and communicate with adjoining neighbors about their privacy concerns.

The proposed new path would be more direct and engineered with more moderate grades. The two property owners affected have verbally agreed in concept to the new easements, according to public works project director Wade Brown.

As a portion of the newly aligned trail would shift closer to homes on Sommet Du Monde, staff anticipated that some fencing might be required to shield those properties from pedestrians and cyclists. 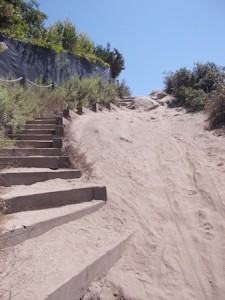 “I’m very supportive of the project for pedestrian and public safety reasons,” said Council member Bob Whalen, calling the proposal a “huge improvement,” though he conceded a possible need for parking restrictions on the access road, a problem cited by Sommet Du Monde resident Rebekah Bhansali, one of two people who opposed the new pathway.

For the trail between the college and the ACT V parking lot, staff recommended creating a path along the base of the hillside on county property outside the Caltrans right-of-way, which will require an easement within the county park. The alternate concept of a standard sidewalk along the highway was complicated by existing utility poles, drainage issues and the risk of pursuing a non-standard design, said Brown.

The city’s budget allots $175,000 for the design and construction of this pathway.