The Laguna Dance Festival marks a 10-year milestone of bringing ballet and contemporary dance to the community.

Sitting at Zinc Cafe, reminiscing about the Laguna Dance Festival’s first decade, in lead up to its 10th anniversary this September, founder and director Jodie Gates recalls how the festival began to take shape on that same patio, just a few tables away.

It was 2004 and Jodie was talking to a local newspaper reporter about her former career as a professional ballerina, her ideas for a dance festival and her concerns about raising enough funds for the endeavor. A man sitting nearby overheard their conversation, told Jodie that he liked her idea and gave her $100 to get the fundraising started. And the rest, as they say, is history.

“[That generous contribution] shows the dedication and love for community that locals here in Laguna Beach have,” Jodie says. Over the past decade, residents of this community and beyond have embraced the dance festival, which has presented 35 top dance companies, 55 performances, 30 master classes and more than 40 free events since its first year in 2005.

“I think what it brings to Laguna is another dimension of art,” says Nancy Meyer, one of the festival’s founding board members. “We present high-level dance in a user-friendly, non-intimidating environment,” Nancy says of the intimate atmosphere. “[The pre-performance talks are] like someone in your living room, talking to you about dance. I think it reaches out to dance lovers and those who are new to dance.”

Jonathan Burke, board chairman of the Laguna Beach Alliance for the Arts—which honored Jodie earlier this year for her contributions to dance—says the festival adds to Laguna’s reputation as a world-renowned arts destination. “Now in its 10th successful season, Laguna Dance Festival continues to reach out to our community,” Jonathan says. “… In addition to experiencing the artistry of our impressive cadre of local dancers, Laguna Beach is privileged to witness performances by principal dancers from San Francisco Ballet [to] New York City Ballet. “… Our community’s knowledge of the arts is truly enhanced through the festival’s accomplishments.”

This year’s festival, Sept. 11-14 at the Laguna Playhouse, features an impressive lineup including Ballet Memphis, Bodytraffic and Complexions Contemporary Ballet; the New York City Ballet’s Gonzalo Garcia and American Ballet Theatre’s Misty Copeland, a ballet prodigy who got her start not far away, in San Pedro, Calif.; Lorena Feijoo and Vitor Luiz, both of San Francisco Ballet; and “Ekphrasis,” a commissioned music-and-dance piece. The 2014 season will be a celebration and a tribute to all who have leapt, sashayed and pirouetted across the stage over the past 10 years.

After traveling all over the world as a principal ballerina with Joffrey Ballet and other premier companies, Jodie retired from her dancing career in 2004 and landed in Laguna, where she enjoyed visiting and had been hosted when performing in Orange County. While getting to know her adopted community, Jodie noticed something was missing.

Ballet Pacifica in Irvine, the county’s oldest and only professional ballet company—started by Laguna teacher Lila Zali in 1962—had just folded, leaving a void for this type of performing art in the region. That led Jodie to start thinking about the many dance festivals where she had performed: Spoleto Festival USA in Charleston, S.C.; Jacob’s Pillow Dance Festival in Massachusetts; and others in Edinburgh, Scotland, and Melbourne, Australia.

“The vibrancy and productivity that these types of festivals bring to a community is unparalleled,” Jodie says. “And I thought, ‘Why not have a big, once-a-year celebration in Laguna Beach. Why not? Everybody likes a party.’ ”

And so, that first year, Jodie called up her friends in the dance world—whom she had come to know through her ballet career—and asked if they would come to Laguna and perform in this festival she was putting together. Several agreed, including actor and dancer Patrick Swayze, who would kick off the opening night. The planning and fundraising took a team including Janet Eggers, who served as board president at the beginning and remains an advisory board member; Steve Josephson of Gallimaufry Performing Arts, which served as the festival’s umbrella organization before a separate nonprofit was established a few months after the first event; as well as many board members and past presidents. Nancy, a friend who had opened her home to Jodie when she performed in OC all those years ago and again when she retired, still serves on the board. “She dreamed with me,” Jodie says.

“I have a profound desire and passion to ignite dance on the West Coast and, specifically, here in California,” Jodie says. “… I do this because I love the community. I want people to be as excited about watching beauty in motion as I am. It transforms lives. It lifts spirits.” That’s true for both the audience and the dancer. At a fundraising dinner this spring, Jodie shared how the art form helped her as an introverted girl growing up in Sacramento, Calif. “Dance personally saved me,” Jodie said, adding that it gave her identity, purpose, health and vitality. “Dance is inherently healing.”

One of the things Jodie appreciates about dance is that, unlike a painting, which can be admired for a long time, “dance is fleeting.” It’s an experience—a performance that unfolds before the audience’s eyes, conveying emotion and meaning, and then disappears. “Dance communicates what even the most skilled words can only silhouette,” she says.

‘FROM TUTUS TO HIP-HOP’

The festival has grown through the years, moving to the Laguna Playhouse for more space and receiving national press as many across the country have taken notice. “People are starting to come from the East Coast to attend,” Jodie says. She says attendees know they will see dance superstars who have just performed at the Met in New York and other top venues. Several times, Jodie has seen the audience stand up all at once and give a standing ovation during a festival performance. “You know that you just witnessed greatness,” she says. “That’s what it’s about—that’s why we do it.”

Jodie tries to present traditional types of dance to make the festival accessible to those who are new to this art form, but also edgier pieces to challenge audiences. “[Performances range] from light and airy to a bit more thought-provoking to downright fabulous,” she says. “We’re careful not to present works that are too evocative because I want the audience to come back. But, I’m anxious to show those pieces that are so outside the box. … I love going from tutus to hip-hop.”

Reflecting on favorite dancers at the festival, Nancy is quick to note Desmond Richardson, co-founder of Complexions Contemporary Ballet. “Watching Desmond is mesmerizing. … His form is amazing, … he brings a lot of emotion to the stage … [and] he puts every muscle into his performance,” Nancy says. “I feel alive and excited when I watch performances like this.”

Nancy also has particularly enjoyed Aspen Santa Fe Ballet and was impressed by the Parsons Dance performance of “Caught,” which uses a strobe light to create the illusion of flight as the solo dancer leaps more than 100 times in six minutes. In addition to breathtaking performances, Nancy also appreciates the personal connections with dancers, talking and having dinner with them after a show. “It’s those bonds you can develop with the dancers [that mean the most],” she says. A VIP reception after the Saturday night gala allows attendees to get to know the performers, who also seem to enjoy the interaction.

Among the local dancers are Francisco Gella and Erin Holmes, both formerly of Ballet Pacifica, who performed duets in the festival’s early years. Francisco says he felt welcomed and was impressed by the community’s heavy involvement and response to the performances. “It was really amazing to see. … People were eating it up,” he says.

Francisco choreographed the pair’s duets—the first was a jazzy ballet number to a mix of tracks by Aretha Franklin and Astor Piazzolla, followed the next year by a romantic ballroom-style dance to “This Time the Dream’s on Me” by Alison Krauss. The first one received a standing ovation and, Francisco says, “I will never forget that moment.” He also has been impressed by top names—“legends of dance”—that have come through the festival. “To be able to have the honor to perform with that roster was a dream come true for me,” he adds.

In addition to performances, the festival presents master classes for local dance students, providing a rare opportunity to take pointers from the stars they admire. Jodie recalls a class when Desmond picked a girl for a solo and she was so nervous, she was physically shaking. Desmond offered his complete attention, saying “Just focus … it’s just you and me.” “The moment gave us all chills. … She will never forget that moment,” Jodie says.

DANCING INTO THE FUTURE

By any measure, the festival has proven a tremendous success in the past decade, but Jodie is worried about sustaining it into the future. “I’m very concerned about funding for the festival,” Jodie says.

Funding—from city grants and individual donations—has not kept pace with climbing costs. Since the beginning, the festival has operated on $165,000 to $185,000 per year; the average cost to bring a nationally recognized company is $20,000, and the festival typically presents several. Add to that the cost of renting the Playhouse for performances, and other expenses.

Jodie would like to re-establish free events like the Taste of Dance performance and class at Main Beach. “That’s something that I want to bring back, but we need the funding,” she says. The festival’s classes for children, too, were put on hiatus a couple of years ago, although a few scholarships are offered for students to attend master classes. “As an educator, that’s a huge aspect of the festival,” says Jodie, who was a dance professor at University of California, Irvine before recently being named vice dean and director of the University of Southern California’s Glorya Kaufman School of Dance. (With this new relationship, she hopes to involve USC dancers in the festival.)

While some of the free events are on hold, Jodie plans to continue public performances during First Thursdays Art Walk in September, which she has done since the beginning to raise audience awareness and expose more people to dance. This year, she plans performances at Dawson Cole Fine Art gallery and two others.

Jodie not only wants to continue the festival for another decade but also expand it with a subscription series of shows throughout the year, as well as more free opportunities for the public. “This is so important to the community,” Jodie says. “ … [It’s] in the fabric of our culture.”

Jonathan agrees that dance has become inextricably woven into this town—forever part of Laguna’s artistic palette. “It can be choreographed. It can be spontaneous. Dance is about something larger than the self,” he says. “… Dance is a rich and timeless form of artistic expression that informs and is informed by all manner of creative pursuits. Dance isn’t just important to the arts landscape; it is an indelible fixture on it.” 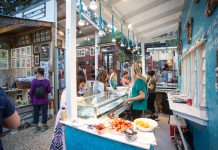 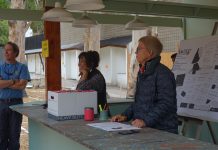