It’s all happening very fast. It’s as though collectively we have decided we are going to run out of time to change.

There are so many projects in the works that the city manager and City Council have set up monthly meetings of an urban planning coordinating committee to provide an interface among on-going efforts dealing with downtown, parking, transit, Laguna Canyon Road, the village entrance, mobility and complete streets, landscape and scenic highways.  Perhaps there are more projects happening at once than at any time in our history. All this has great potential for wonderful results, but also for mistakes to be made.

Speaking last week in the Council Chambers about Laguna’s future, world renowned urban planner Andrés Duany cautioned, “This is a place of extraordinary character and a very delicate and fragile character…built over time by very unusual people. The evidence is all around you. It’s immersive…it’s informal, funky. At the same time it’s composed. …This kind of place is very fragile and very, very subject to destruction by the 20th and 21st century. Every thing that happens out of here, whether it be the traffic, whether it be the regulatory environment of California … trying to improve this place, to make it sort of work better. But it won’t do that, you will lose it. . . The role here might be one to understand what can go wrong with a place like this and sort of vaccinate it—you know, to prevent actually losing it.” (See page 1 story.)

The audience hadn’t thought of our situation in quite that way.  They were stunned.  Then enthusiastic applause broke out. Duany had summarized our fears, but at the same time his insights had given us confidence that there is a future for Laguna that will preserve the characteristics that we cherish.

But the world is not waiting even for the results of all those studies or for the urban planning coordinating committee to coordinate.  Decisions are being made, and projects are going forward.  “Vaccinating” in the form of planning policies has worked in the case of the E-rated Ilsley house at 31351 Coast Highway, now owned by Jack Corwin. Monday night at the Heritage Committee, architect Todd Skenderian presented plans for preservation of the house. Mr. Corwin assured us that he is on the restoration track.

Constructed in 1930, this Spanish colonial revival house is one of the early Coast Royal houses. Philip Ilsley was one of the founders of the Laguna Beach Art Association, and his name can be found on one of the concrete memorial squares on the lower floor of the Art Museum.  On a spectacular site above West Street Beach, the home had gardens that were postcard subjects and published in National Geographic in 1934.

Demolition of the house proposed in 2005 was halted as a result of objections by the public. For the first time, our city applied California Environmental Quality Act standards to a property on the historic inventory, and Mr. Corwin reconsidered his plan.  Then two years later he put his restoration and expansion plans on hold and the property deteriorated. Neighbors feared a continual decline and “demolition by neglect.”  City code enforcement found projects constructed without permits. Now with planning intervention and restoration, this segment of that fragile Laguna composition will be intact.

Our work on the Ilsley house deepened our understanding of Laguna history and led to our involvement in the neighboring Guy Skidmore, Stonehenge house, as I have recounted in earlier columns. As one thing leads to another, I learned a little about artist Joane Cromwell, Joe Skidmore’s second wife. Two weeks ago, upon returning home, I found a message from local historian Jane Janz. A Cromwell painting was offered on EBay; not just any painting, but a painting of Joe Skidmore’s Coast Royal house.  There it was, tiny, nearly all alone in a pristine coastal setting, with Aliso Beach and Goff Island in the distance.

Change has engulfed that peaceful scene, yet that landscape is still the core, the basis for what came after: many unusual people and many unusual decisions, adapted to the beauty. We don’t have to rush to change, we can listen to where we came from and continue to tread lightly. 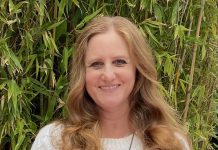