Aileen Kruidenier’s Irish grandmother, Eileen, was sick with cancer and in hospice care when she began painting glorious pictures based on her memories and experiences.

“We asked her why we did not know this about her,” recalled Kruidenier. “She said ‘don’t wait until you’re an old lady like me to share your gifts with the world. You’ll know when it’s right, and you’ll do it’.”

Kruidenier knew the time was right in 2013 when the Laguna Beach resident was diagnosed with Lyme disease.

“When I was diagnosed, the doctor told me it was the worst result she had ever seen, but I was the highest functioning,” said Kruidenier. “I attribute that to my lifestyle.”

That lifestyle included raising two young boys, so she was concerned with keeping her family on a healthy diet. Kruidenier began studying nutrition in earnest and creating recipes.

“Good food is the foundation of health,” she stated. “Whether it’s preventing or healing, nothing works in terms of treatment plans like a good nutrition foundation.”

Intent on sharing her passion for healthy cuisine, Kruidenier hit upon the concept of bringing her recipes to the public via a 30-foot airstream trailer that has been renovated and equipped with a full size commercial kitchen.

Kruidenier calls her new business Eilo’s Kitchen, named for her late grandmother, who was known as Eilo. It is one of the first full-sized commercial kitchen to operate in an Airstream in the state.

“The Airstream is fun and gets people’s attention,” said Kruidenier. “People are in to mobile food, they want to stay near where they live, so we’re bringing it to the people.”

Cathy McKnight, executive chef at Eilo’s Kitchen, is a former Food Network “Chopped” competitor who started her own catering business more than 25 years ago. Her goal is to go beyond organic using locally-sourced ingredients, thereby providing people with the most nourishing foods available.” 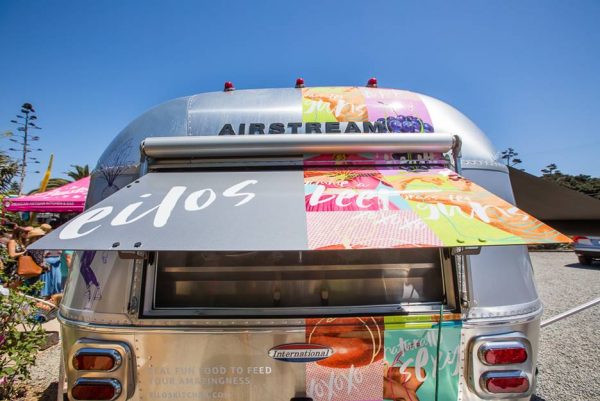 “There’s no gluten here,” said Kruidenier. “We only use coconut oil, avocado oil, we use rendered fats from the meats that we have. The bacon is made in house with no sugar. We don’t use processed sugar or soy. But we don’t want people to feel like they’re missing anything. If someone is vegan or vegetarian, we want them to have an option. It’s food you can trust and feel safe, which sounds strange when you’re talking about eating flood, but to people who have allergies or health issues, it’s a big deal.”

Kruidenier’s first public test of Eilo’s Kitchen was in April on Earth Day at the Ecology Center in San Juan Capistrano, which supports creative solutions to improve the environment.

The test proved a success and now Eilo’s Kitchen is scheduled to set up at the Ecology Center the first Sunday of every month from 10 a.m. to 3 p.m.

They’re also testing a location in a Corona del Mar parking lot at 2101 E. Coast Highway at Avocado Avenue where they’ll fire up the grill every Thursday from 10 a.m. to 2 p.m.

Kruidenier said her main business is catering weddings and parties, although there are a few spots in the hills above Laguna Beach that are difficult to access with an Airstream.

“My goal is to add more Airstreams,” she said. “I have a passion for kids and schools. I want to show people that you can eat healthy food and still have it taste good.”