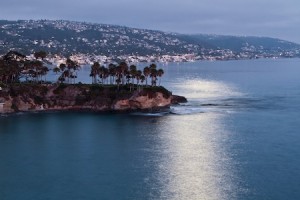 If you’re a stargazer, you already know the darkest places are best for viewing the night sky. In Laguna, this usually means spots off the traffic grid and above the frequent coastal cloud cover.  Because you never know when the clouds will lift, it’s wise to head inland for special astronomical events such as meteor showers.

While Lagunans can’t always count on seeing stars, we can usually enjoy the path of moonlight on water for at least a night or more every month. Known as a moonglade or a moonwake, or a silver sidewalk by sailors, this shining path across the waves gives a magical glow to well-timed nighttime walks along the coast.

The moon’s constant presence in the night sky has inspired scientists, artists and storytellers. One of the most common myths about the moon is its power to influence human and animal behavior. Werewolves, vampires and even language (the Latin luna gives us lunatic and lunacy) are all part of this folklore. Although many people are aware of studies linking the full moon to increases in crime, dog bites and other erratic behavior, they are less likely to know about an equally large volume of research showing no such effect.

Nocturnal animals such as owls, bats and others have evolved natural behavior under many millennia of moon phases. Unfortunately, they have no way to adjust to a rapidly growing source of illumination: artificial light. This light pollution not only limits our ability to stargaze, but has been tied to population declines among some nocturnal reptiles and mammals and disruption of human sleep patterns.

The International Dark Sky Association (IDA) has designated April 5-11 as Dark Sky Week to raise awareness of light pollution around the world. The organization estimates that the U.S. could save $2.2 billion by eliminating excessive or unnecessary artificial lighting and also boost revenue from sustainable tourism.  According to astronomer Andrew Fraknoi in a recent documentary, “City Dark,” as many as 80% of the world’s people have never seen the Milky Way.

While the moon offers some consolation for the thousands of stars we miss seeing from urban areas, it’s not nearly enough to compensate. For an unobscured view of our galaxy and other seldom-seen constellations, you can visit Death Valley, which the IDA just named its 11th International Dark Sky Park.