Coastal Orange County is home to a number of famous faces, but just one has whiskers and a long, furry tail.

Aragon the Cat, the chubby feline who plays Lord Tubbington on the hit Fox show “Glee,” lives in Newport Beach with his human owner, CeCe Card, who grew up in  Laguna Beach and where Aragon was discovered.

The 24-pound Bengal is an “actor, comedian, [and] social activist,” according to his very own facebook page.

Card is also working on obtaining nonprofit status for Aragon’s Love, whose mission will be to raise funds for Animal Crackers Pet Rescue in Laguna Beach and other local rescue groups. She is also training Aragon for a post-television career as a certified therapy cat.

And as you might expect of an acting professional, Aragon is nothing like his “Glee” character, according to Card. On TV, Tubbington is known to smoke, drink, do drugs, and eats only human food, including fast food restaurants like Arby‘s. His occupation is listed as “Gossipmonger” and he recently joined a gang.

Aragon is friendly and affectionate. He enjoys walking around the neighborhood, exploring wherever his nose takes him and visiting local shops. He’s laid back, loves attention, is very curious, and the only “drug” he likes is catnip. He also enjoys fine dining, Card said.

“(It’s a great) opportunity they gave this little guy, because I’ve been able to take the idea and create a whole personality, for good, and that’s Aragon the Cat,” Card said.

The chunky feline has been on six shows and recently taped more for the upcoming season. Card, who works as his manager, gets paid per episode and splits it with Aragon‘s trainer. She declined to provide specifics. “It’s a lot less than you’d think,” she said, adding that Aragon commands $150 to make a special appearance.

“We’re not looking at a ton of money. Mostly what we’re looking at is a message of hope and a fun storyline and that’s it,” she said.

Card, who previously called herself more of a “dog lover” than a “cat person,” adopted Aragon in 2005 when he was about 1-year-old. 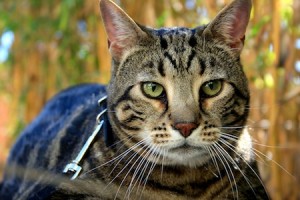 A friend told her of an available Bengal kitten at an East Coast rescue group, which intrigued her.The group sent her a photo of “Aragorn,” his name before Card modified it.

“I fell in love with him immediately,” she said. “He was so big and chunky.”

He already weighed in at 12 pounds, Card estimated. Because of his “kingly stature,” he was named Aragorn, after the character from J. R. R. Tolkien’s “The Lord of the Rings.”

The group’s vet told Card he was the “king” of the litter and described his personality as friendly and sociable.

Card was spending Christmas in New York and the rescue group’s headquarters was quite a distance away, so the vet agreed to meet her with Aragon at a halfway point. The meeting didn’t go as well as Card had hoped though, Aragon was grumpy from the traveling and being stuck in the crate, he seemed “big and wild,” she said.

She went back to NYC and spent a few days at her hotel bonding with him. She talked to him, hand-fed him steak and carried him around the hotel, all working toward building a trusting relationship with the big Bengal. By the time came to fly home to California the two had established the beginning of a wonderful relationship.

“At takeoff, he was so relaxed that he was laying parallel, spread out on the tray table, kneading his paw into the palm of my hand,” Card said. “I was a proud mom.”

Card brought Aragon back to Laguna Beach, where he immediately made himself at home. He stepped out of his crate and into her house like he owned the place, she said. The duo moved to Newport Beach just last year.

As a young cat, he was very energetic and curious, Card said.

He got used to being carried around and being in noisy locations quickly, she said.

It was a process to teach him to walk on the leash though, Card said. She started by just following him around and then slowly added the collar and leash. Now, he’s used to it.

“I let him lead me,” she said. “He really looks forward to his walks.”

He takes walks twice a day. “From time to time, he likes to jog,” Card said. “He is a lot faster and in better shape than he seems.”

Aragon’s weight elicits occasional mean comments, but Card doesn’t respond to the negative remarks. “He’s the size he needs to be. He’s healthy. He’s been full figured since birth,” Card said. “This is a message to let everybody be who they want to be.”

Aragon became a feline actor after being “discovered” while on a stroll in Laguna. Card was walking him on a leash with a friend, who happened to be a talent scout for Paws For Effect. Her friend, Debbie Pearl, thought he had the perfect look and demeanor and suggested he try his paw at acting.

Within a month, he had an audition for “Glee” in a group casting for the role of Lord Tubbington and was offered the part.

Since then he has also done an iPad Verizon commercial and shot a video with the cast of television’s “Ghost Girls.”

He also recently did a humorous scripted video that includes a voiceover that will soon be posted on YouTube, Card said.

While Card would love to Aragon cast in a Superbowl commercial, her main goal for her pet is to spread a positive message of love, genuineness  and acceptance.

“As many times as we can get that message out there, whether it’s a human being saying it or a cat exemplifying it,” it’s important, she said. “You never know who the next spokesperson is going to be.”