A brush fire pushed by afternoon winds forced a five-hour closure of Laguna Canyon Road on Friday, July 3, and one fire fighter was injured in fighting the 12-acre fire, police said.

Retardant dropping aircraft and about 150 firefighters successfully halted the forward progress of the blaze that started about 3 p.m. in the 1900 block of Laguna Canyon Road, north of Canyon Acres Drive, said police Sgt. Tim Kleiser.

The closure further congested already heavy traffic on Coast Highway, but the preview party at the Festival of Arts in Laguna Canyon went on as scheduled.

No homes were threatened nor were evacuations ordered due to the fire, Kleiser said. Firefighters remain on the scene managing “hot spots” in an area that can only be accessed on foot, said Kleiser. Downed electrical wires on Arroyo Drive have been deactivated, he said. Authorities partly reopened the road by 7:50 p.m., police said.

A firefighter who suffered an ankle injury was transported to a local hospital for treatment, but is expected to make a full recovery, said Kleiser.

“The fire was going up the hill but the wind was coming back south blowing it back down so the planes and helicopters basically made a perimeter closing it in and the firefighters on the ground kept it away from the road,” said photographer Greg Farnes, who observed the fire from a vacant lot on Skyline Drive in the Mystic Hills area. 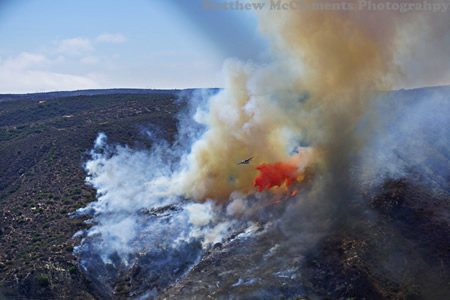 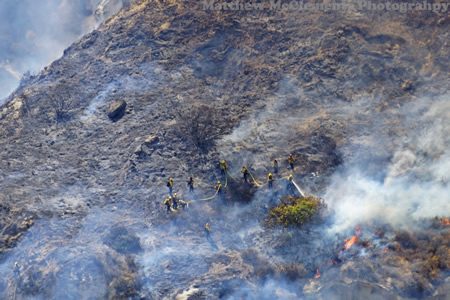