Laguna’s girls water polo run for their third straight Division 1 CIF title ended Wednesday, Feb. 24, at the Woollett Center in Irvine as the Knights held off Laguna in the semi-final to pull off the upset.

The Knights played well, but self-inflicted errors by Laguna handed victory to the fifth seed.

After trailing 3-1 at the half, Laguna recapture momentum in the second half by tying the contest at 1:53 on a score by Sophia Lucas off a pass by Bella Baldridge.

Breakers had a number of great opportunities after that to take the lead but could not execute their shots even when uncontested.

Foothill scored on an outside shot with 2:20 remaining and Laguna had a number of great opportunities in the final minutes to tie the contest. Breakers last chance came on a power play in the last 29 seconds, but both shot attempts failed. Holly Parker was exceptional for Laguna in the cage with 10 saves including a number of amazing stops.

The 2016 Breaker squad (27-3) set a team record for defense allowing only 3.5 goals per game but it was the offensive execution especially on power play opportunities that plagued the team down the stretch.

Against Mater Dei, the Breakers invaded a hostile environment typical with the venue packed with organized student cheer sections and rabid fans. Laguna scored on their first possession as Ally Joachim’s sharp pass to Bella Baldridge was swept into the Mater Dei cage. Monarchs came back to tie the game and the contest settled into a chess match with the Breakers missing a number of great shots.

In the second period, Laguna took the sprint and immediately scored as Ally Joachim got the goal off a Sophia Lucas pass. Again, Mater Dei answered on their very next possession to knot the contest at 2-2 at the 5:18 mark. Breakers took the lead a minute later as Sophie Leggett scored off a Haley Evans pass and after a missed shot, Bella Baldridged scored on a power play and the Breakers led 4-2. Laguna added another goal by Sophia Lucas to take a comfortable 5-2 advantage at the break.

In the second half, the Breakers seemed tentative, giving their aggressive host a chance to get back into the contest. Things seemed grim at the 4:41 mark of the final period when Mater Dei scored to tie the contest at 6.

Just as the outcome looked doubtful, momentum suddenly changed. Baldridge fed Leggett for a score and the Breakers were up 7-6. Breakers stopped Mater Dei’s next two possessions with a save by Holly Parker and a steal by Haley Evans. Then Baldridge and Natalie Selin took over. Selin scored at 1:48 off a pass from Baldridge, who in turn stole the ball from Mater Dei and fed Selin again and it was suddenly 9-6 with a minute remaining and the home crowd deflated. Mater Dei was awarded a five-meter shot in the final seconds for the last goal. 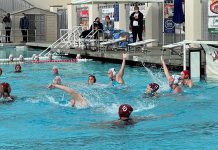 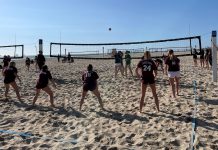