Jessica Burk was a double winner and was the repeat champion in the 300 Hurdles. The 4 x 100 relay also broke the school record of 49.8 set back in 1974 by Lisa Wankier, Pathiba Raj, Karen Bourcki, and Sands Minter.

An article in the May 11 edition that relied on official results reported incorrectly that Majia Shaw ran in the 4 x 100 relay at the Orange Coast League track meet May 3. Coach Steve Lalim said alternate Reilyn Turner ran in her place, a substitution that apparently went unrecorded.

Ryan Smithers took the 1600 and 3200 meter runs while Jet Rocha took the 400 meter run to a third place finish in the league meet and a second place overall tie with Estancia in the final league standings. Godinez won their third consecutive title.

The league meet champions automatically advance to the SS CIF prelims next week and the second and third place finishers also advance if they meet the qualifying standards for the division. Breakers are in Division 3 as the smallest school in the enrollment bracket. Next season the Breakers join the ultra-competitive Sunset League. The division assignments (Wave or Surf) will be released after the spring sports season concludes in May. 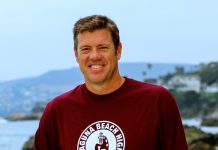 Sports Update: Patchell Off to Brooklyn