Breakers poised for toughest test of their streak

Laguna’s top sports team, the 2016 girls water polo squad, traveled to Santa Barbara this week and should face their toughest tests of the season. Breakers will meet sixth-ranked Dos Pueblos in a non-league match on Thursday, Jan. 14 in Goleta before competing in the 24-team 17th annual Santa Barbara Tournament of Champions on Friday and Saturday. Should the seedings hold, Breakers would face So Cal # 7 Santa Barbara on Friday, then fourth-ranked Orange Lutheran and second-ranked San Marcos in the run to defend their tournament title on Saturday. A weekend sweep would run the Breakers win streak to 68, tying Dos Pueblos for the longest Division 1 run in So Cal history. The Chargers won 68 straight from 2009 to 2011 including three CIF D-1 titles and six in-season tournament crowns. Breakers have two straight D-1 titles in their current run along with seven in-season tournament titles.

Last week Laguna had a rematch with So Cal’s third-ranked Foothill on Wednesday, Jan. 7 at the Knight’s pool. Unfortunately for the hosts, Breakers continued their domination with an 11-5 victory. Mia Salvini started the scoring with a power play score off a pass from Haley Evans with two minutes gone in the opening period. The Knights battled the Breakers to a 2-2 tie after the first period but the Breakers converted five of their first seven possessions to goals in the second period to ice the contest. Overall, Sophie Leggett led in scoring with five goals, Salvini and Bella Baldridge added two scores and single goals came from Natalie Selin and Sophia Lucas. Haley Evans led in assists with three, Baldridge was tops in steals with two. Holly Parker recorded seven saves and had a number of key saves to maintain the Breaker momentum. Laguna leads the all-time series 14-11. 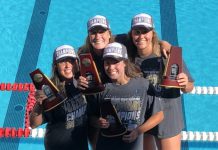 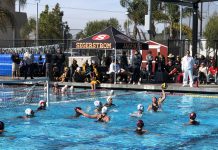 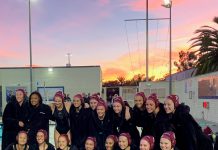