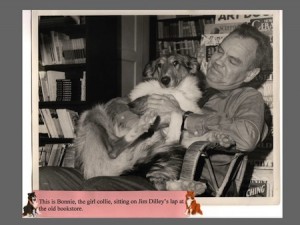 I’m a booklover.  I love the feel, the look, the smell of books.  I’m drawn to others who share this passion—librarians, collectors, and independent booksellers (particularly sellers of used volumes).  A trip to Portland always entails many hours at Powell’s Books, and similarly in the Bay Area I’m drawn like metal to a magnet to Moe’s Books in Berkeley, and the Argonaut and Bolerium bookshops in San Francisco.  Much closer to home Dilley’s Books was an oasis for me when my wife, Ginger, and I moved to Laguna Beach in 1974.

As much as the books themselves, Jim Dilley, who co-owned the shop with his wife, Jeanette, kept me coming back again and again. To a hurried and worried doctoral student in history at Claremont Graduate University and young history instructor at 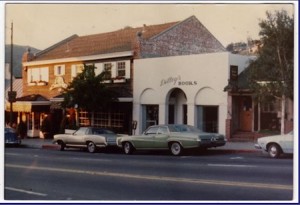 Santa Ana College, Jim Dilley was like a kindly professor, a Mr. Chips of sort.  Always looking a bit disheveled in his rumpled tweed jacket, his penetrating eyes looked out beneath bushy eyebrows.  His collie dog would wander the store unmindful of customers.  My visits usually came in the late afternoon; a good time for some relaxed browsing on my way home from teaching.  I’d be scanning the shelves, often inspecting books on U.S. history.  On one of these occasions I was looking at a volume on America’s Progressive Movement of the early 20th century.  Mr. Dilley casually came up to me and gave me his critique of the book.  Never had I been given such a searching commentary on a history book by a merchant.  I was amazed.  Sometime after our conversation, I learned that he had a Ph.D. in history and had taught at the College of San Mateo.  His grasp of European history was just as impressive if not more so than his background in America’s past.  Then, on that same earlier occasion, he walked me around his store, giving me detailed descriptions of half a dozen or so titles that interested him and might interest me.  Never did I feel pressured to buy anything; in fact, he seemed indifferent to making sales.  Simply put, Jim Dilley knew the books in his store; he had either read them himself or read about them in reviews.  He was a rarity: a book seller who was a scholar. 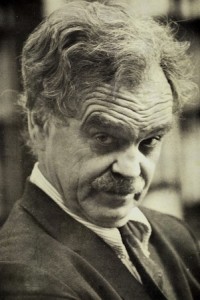 Not until later did I learn the extent to which Dilley was an environmental activist.  Assuredly, I remember the petitions he placed near his cash register and the Greenbelt meeting announcements mounted on the store window, but I paid little heed to these indicators as I was more concerned about the past than the present or the future.  What a pity that my environmental consciousness had not yet developed to the point that I could have discussed his vision of a greenbelt for Laguna–a natural, undeveloped area surrounding our town.  In hindsight, how I wish I had known back then what a force Jim Dilley was for the environment, and how eloquent of a spokesperson he was for the open space that has come to define our coastal town.  Since those days I have come to appreciate the extent to which Dilley’s Books was not only a venue for bibliophiles but also ground zero for Laguna’s environmental activists.  His bookstore closed in 1982, but his legacy—embodied in the James Dilley Preserve/Laguna Coast Wilderness Park—has left an indelible green imprint on Laguna’s heritage. 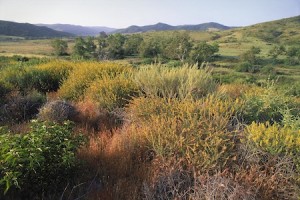 Tom Osborne’s new book, Pacific Eldorado: A History of Greater California, will be released by Wiley Blackwell Publishers in January 2013.