A Laguna Beach youngster already drawing attention for his skills surfing now lies sedated in a coma, battling to recover from a head injury after a snowboarding jump at Mt. Bachelor near Bend, Ore.

Brayden Belden, 11, a fifth-grader at Top of the World Elementary, was airlifted under blizzard conditions to the pediatric intensive care unit of Randall Children’s Hospital in Portland, Ore. Doctors are trying to stabilize his condition and control swelling around his brain before he can be transported to another pediatric facility in Southern California.

The boy’s father, Matt Belden, who performed CPR to restore his son’s breathing until rescuers reached the jump on Tuesday, Feb. 20, is cautiously optimistic his son’s condition will stabilize.

“He’s a gladiator,” said Belden in an interview this week, noting that his son had already survived the initial crises at a Bend hospital when a physician predicted he had two hours to live because his injuries were so grave.

He credits his son’s athleticism and helmet for saving his life. “He would have died on contact,” said Belden, who remembers a sinking feeling as he watched his son’s takeoff of what was to be his last jump of the day.

“This is the scariest, surreal moment of my life; it’s in God’s hands,” said Belden, a longtime surfer and bond trader by profession, who moved to Laguna Beach from San Francisco six years ago.

He and his wife, Denise, also are parents to two younger children, Riley, 9, and Kaley, 5, who also attend TOW. Brayden, who won the under 13 division at the Brooks Street Classic last fall, has already picked up sponsorships by surf brands. The couple’s younger children are now under the care of their maternal grandparents while their parents remain at the bedside of their older sibling.

“All the doctors agree, the more love he has the better the outcome,” said Belden.

And support is pouring in, partly as a result of a gofundme campaign started by a friend to assist the family with out-of-pocket medical costs. Pro-surfer Kelly Slater reposted the appeal to his Instagram account. It has pledges of $76,000 in four days by 957 people.

“The level of support has really helped Denise and I,” said Belden, who has spent the last week of sleepless nights on his phone absorbing protocols for treatment of head trauma, such as his son’s level of consciousness on a Glasgow coma scale ranking or whether pressure in his son’s skull will require a craniectomy, which involves removing a portion of the skull in order to relieve pressure on the brain.

“My blinders are on one thing; this kid’s got to live,” he said. 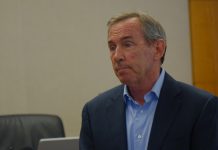