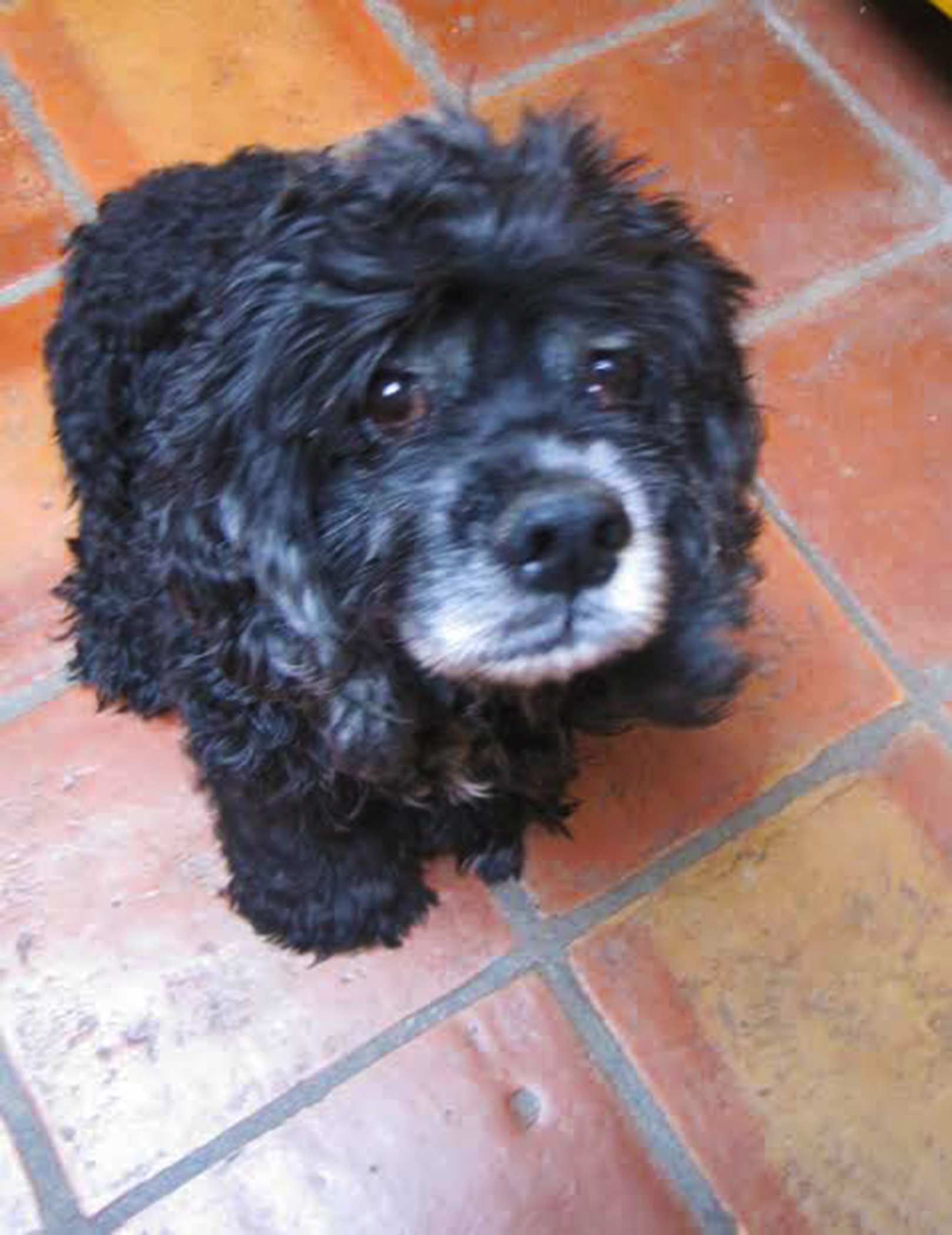 Our dog, Bogart died earlier this month. Rosalie found him tucked in his bed and when he didn’t get up for his morning walk, she ran to wake me.  He looked very peaceful. Still, we cried, but were thankful he died in his sleep in his little bed.

We called Bogart “puppy” throughout his life, even though he lived almost 18 years and was one of the oldest dogs in Laguna. Bogart was no ordinary dog. People would ask how he lived so long. Knowing our little rascal, we would kid that he was too stubborn to die, but it was his love, companionship and tremendous loyalty that kept him (and us) going.

Way back in 1997, Rosalie asked for a cocker spaniel for her birthday. We got Bogart when he was only a few weeks old from a breeder in Corona. He was really cute, and as it turned out, was from some impressive line. His grandfather was the Marquis of Chocolate! But he was the last of the litter and I figured nobody wanted him because he wouldn’t kiss. I predicted he would never kiss, and I didn’t want a dog that didn’t kiss. But Rosalie insisted and would become his Alpha. And I was relegated to Beta. Our royal pup was to be king of our household.

“What do we name him?” Rosalie asked. “Well, since we’re Jewish,” I said, “we should name him after the dead.” So we named him Bogart, after the neighbor’s cat that had recently died.

The name fit.  Some of our favorite memories were playing catch on our deck. We would throw a tennis ball and Bogart would scramble for it.  But instead of running back with the ball like other dogs, he would “bogart” it and do everything he could from letting us get it from him and giving a sly look that he was getting away with something. So we would have to distract him to get the ball back and then repeat the play.  He could be such a brat, but such a character!

But he also showed character. When Rosalie was sick from the hospital, he wouldn’t even let me near her for fear I would hurt her.  It was the only time he ever growled at me.

As he grew older, he was less inclined to play ball or take the long walks we enjoyed.  He was losing his sight and hearing and one night he strolled onto the deck, accidentally falling off the side. We panicked looking for him, but then Rosalie saw him wandering the driveway below, as if nothing happened. No broken bones at all! (He remained quite strong to the end, even pulling me up our hill the day before he died.)

So we thought he was super dog who would live forever.  Of course, that was not to be. The day before Bogart died, I was working at my computer.  I hadn’t held Bogart for a long time, so I put him on my lap and hugged him over a half-hour. Bogart peered into my eyes with a soulful look that seemed to see right through me and then he kissed me like he had never kissed me his entire life. I said, “I love you too, Puppy.”  For a dog I was afraid would never kiss when he was a puppy, it came full circle with that last kiss.

What I realize now is that one had to earn Bogart’s love. We miss you, Bogie. Thank you for letting us earn your love.