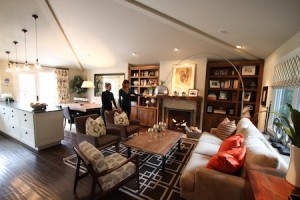 A record low inventory of homes on the market, rising prices and a 33 percent increase in sales last year indicate an increasingly healthy real estate market in Laguna Beach.

At the moment, such a market favors sellers, but experts advise it’s time for buyers to act as well.

“Sellers are now realizing that the market has come back,” said Surterre broker and Laguna Beach resident Pamela Horton, referring to a six-year span of slipping values.

With the city’s inventory at a new low of just 159 homes as of Jan. 1, sellers are closing deals more rapidly and at higher prices, she said. Last year, 438 Laguna Beach homes sold, up 32.9 percent from 2011’s volume of 328, according to California Regional Multiple Listing Service.

Dorit and Steve Lessard decided to sell their Bluebird Canyon home now to take advantage of the favorable conditions. Having purchased the four-bedroom, 2,100 square foot home in 2001 and subsequently remodeled it, they needed to sell their current home before taking on a new challenge, their dream fixer-upper property. “We realized we could probably get what we wanted for our home now,” said Mrs. Lessard. The house, listed at $1.5 million, went on the market last Friday and had already been shown six times by Tuesday.

Agreeing that it is “absolutely” a seller’s market, Surterre broker and industry veteran Michael Gosselin called the current lack of inventory “the most significant part of our marketplace.” While inventory typically rises during the first month of the year, inventory is unchanged since Jan. 1, he said.
“It’s just staggering,” said Gosselin. In his 37 years in the business, with the last 29 in Laguna, he said he’s “never seen anything like it.”

Culling figures from realtor.com, local developer Joe Hanauer said that Laguna’s inventory is down by 30 percent from a year ago, compared to a 17 percent decrease nationwide. And the time a home stays on the market has decreased by 33 percent here compared to 12 percent nationally.

Other recent trends also bode well for the Lessards. The increase in sales of homes priced over $1 million outpaced the rise in under $1 million sales in 2012, said Horton, indicating high-end buyers’ renewed confidence in the market.

Laguna Beach ranked 10th among the top 25 areas with the most million-plus sales, with 307 such sales last year. The most expensive transaction went for $20 million, within the Montage resort, with the lowest coming in at $285,000 for a home in Laguna Terraces, off of El Toro. Nearly half of the 159 homes on the market in Laguna this week are priced above $3 million, Gosselin said.

Horton attributes the increase in luxury sales to a recovering economy, rising home prices and a record number of cash purchases. Gosselin, too, found a “significant amount of cash in the market place,” estimating that 30 to 40 percent of his firm’s business was cash. He added many people now look upon real estate as a good investment.

Hanauer suggested that owners of higher-end homes rode out the downdraft, preferring to wait for better prices. According to his data, prices in Laguna began to rise last March, about the same time that Laguna’s inventory began to plummet.

Following housing trends since 2006, Horton noted that average inventory in Laguna rose from 198 in 2006 to 308 at the end of 2008, when sales began to fall, reflecting low consumer confidence. “When investors started coming back to the market in 2010 this was a sign of the market to come,” she said.

In 2012, the median home price in Laguna of $1.2 million shows a 10 percent increase over 2011, according to Gosselin, noting that median price means that half of the homes sold above that price and half below. Of the 438 homes sold, 275 were priced below $1.5 million, while only 28 sold above $4 million.

Lack of inventory will put pressure on prices, Gosselin said. And interest rates have risen a quarter to a half percent over the past few months. To buyers waiting for the bottom of the market, he said, “your wait is over.”

And bottom-fishers may be too late. DataQuick figures show that foreclosure resales in the Southland grabbed 14.8 percent of the market last month, compared to 32.4 percent a year earlier. Foreclosure resales in the region hit a high of 56.7 percent in February 2009. In Laguna Beach, 14 homes are currently listed as short sales or REO/bank-owned properties, or about 8 percent of current inventory, according to ForeclosureDestination.com.

Buyers, too, are showing revived interest in real estate, with visitors to Realtor.com up 30 percent over last year, said Hanauer, who is the company’s chairman.

“There are so few homes available that we’ve reconsidered our search parameters a few times to help us find a home more quickly,” said Laguna Niguel resident Albert Tejidor, who said that after looking casually for a home in the south county area over the last year, he and his wife began searching earnestly in September. With so few listings that matched their needs, the couple strengthened their rapport with agents specializing in their preferred areas. Now, they sometimes manage to see a few homes before they hit the market, which Tejidor figures improves his chances. “Attractive listings at reasonable prices move quickly, sometimes within days,” he said.

Another Kind of Spin Class