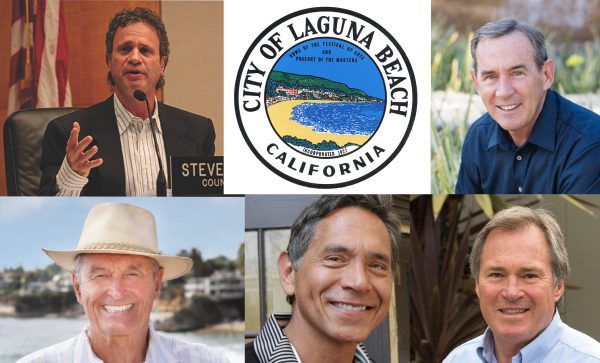 Candidates for Laguna Beach City Council squared off Monday about development and the lack of civility at public meetings during the first forum of the 2020 election.

Redevelopment has become one of the leading issues of this year’s election, especially following the City Council’s decision to advance components of the Downtown Specific Plan to the California Coastal Commission. Although there was widespread community support for loosening requirements for the majority of new businesses to obtain conditional use permits, some advocates argue that allowing new ventures to open without providing off-street parking will add to traffic gridlock and other undesirable outcomes.

Whalen and Dicterow defended their long-held stance that Laguna Beach should require new development to be compatible with existing community character.

“I’m not going to comment on specific projects that are going to come in front of us but I strongly support the idea that projects that come through need to be of the right scale,” Whalen said. “They need to be consistent and compatible with the scale of the community that we have currently.”

As a real estate attorney, Nokes has helped clients navigate the design review process and was an outspoken supporter for reforming the historic preservation ordinance.

“I think one of the things we lose track of is there becomes a contest between having to preserve something in total amber and never change a thing—which has its own difficulty for homeowners, property owners, and life safety issues— and … maintaining an eclectic mix of development and architecture in neighborhoods,” Nokes said.

Nokes also argued that voters should know the facts before making their choices for the City Council.

“I’m not in favor of bulldozing Laguna,” he said. “I don’t believe there are $2 billion in pending projects. I don’t believe than 30,000 barstools can be accommodated in Laguna restaurants.”

Flores argued that efforts to preserve Laguna Beach’s uniqueness should be extended to maintaining the city’s mature trees and continue planting new trees.

“I would work more closely with the landlords to not come forward with a property scheme that isn’t in line with the architecture and feel of Laguna Beach,” Flores said. “We would make sure there is some sort of a subsidy for people who want to maintain their house in a historic manner.”

The City Council has faced heated criticism from a group of residents, including Weiss, who argue councilmembers should have required the Laguna Beach Chamber of Commerce to name who contributed to its $20,000 grant for a parking structure study.

“Are we going to give Laguna to big money so they can monetize it or keep the Laguna that we moved here for,” Weiss said.

Many residents have grown exasperated over beachgoers parking in neighborhoods when street parking close to the beach is oversaturated. Dicterow claims building parking structures in strategic locations in both North and South Laguna could encourage the Coastal Commission to allow permit-only residential parking districts that would limit on-street parking on certain streets to residents and their guests.

The candidate forum’s discussion also turned to the topic of a lack of civility during city council meetings, specifically from Councilmember Peter Blake. In May, Whalen said Blake violated a code of conduct email by sending an email to city leaders claiming that Councilmember Toni Iseman was unfit for office because of an alleged medical condition. Whalen and fellow council members stopped short of censuring Blake.

Weiss criticized the incumbents for their decision not to hold Blake accountable through an official censure vote.

“This is unconscionable and both Mayor Whalen and Councilmember Dicterow—and the city manager—all three of these officers are responsible for enforcing the city’s own ordinances and they don’t,” Weiss said. “I’m very disappointed. It’s created a hostile environment and if elected I won’t allow it to continue.”

Whalen defended his response to Blake, saying that he has interrupted Blake several times for comments he’s made on the dais.

“The night he attacked Toni, I did respond to that specifically and said, ‘I think it was inappropriate,’” Whalen said. “Could I have done more? Perhaps but Peter is entitled to his opinions.”

Dicterow pointed out that Robert’s Rules of Order, a parliamentary procedure widely used in the United States, show that only one person can run a public meeting. The City Council majority tapped the sitting mayor with that responsibility.

“If I’m fortunate enough to be reelected and to be mayor next year, those of you who remember me during my terms as mayor remember I’m from Brooklyn,” Dicterow said. “I know how to handle people. It’s not going to happen on my watch.”

A recording of the entire forum is available at facebook.com/VillageLaguna.