The Laguna Beach City Council will consider a five-year contract Tuesday worth more than $890,000 for a new computer-aided dispatch system for its police, fire, and marine safety departments.

If approved, SOMA Global’s cloud-based system will replace the technology that Laguna Beach has used since 2006. The computer-aided dispatch (CAD) allows command staff to coordinate and track personnel and equipment responding to calls for service.

Modern CADs also monitor emergency vehicles’ locations via GPS, which can be used to direct first responders to the fastest routes.

SOMA Global was selected from a short-list of four qualified vendors.

“All four vendors demonstrated their product in August for a group of 21 public safety personnel, along with I.T. staff,” according to a staff report. “The overwhelming choice of the stakeholders was the SOMA Global product.”

An approved acquisition of this consequential technology would be a swan song for Police Chief Laura Farinella, who is set to retire on Thursday. The agenda item is the result of a 12-month process following a request for proposals coordinated in partnership with Fire Chief Mike Garcia and Gavin Curran, director of administrative services.

To kick-off the purchase, Laguna Beach will have to pay $269,000 to SOMA Global within the first year of the contract. City staffers also asked for an additional $120,000 for hardware including desktop computers, handheld devices for frontline first responders, iPads for Fire Department vehicles, and a backup server.

The City Council will also consider earmarking $125,000 for public safety overtime to train on the new software and a $135,000 contingency fund in case of unforeseen technical challenges. All together, councilmembers could set aside up to $649,400 for the first year of the program’s life.

In the course of reviewing SOMA Global’s proposal, Laguna Beach staffers contacted other agencies for feedback on the software. They received positive feedback from the Riverside County Sheriff’s Department, Palm Springs police and fire departments, San Diego Harbor Police Department, Indio Police Department, and the Police Department of Richmond, VA, according to a staff report.

The City Council will consider this item as part of its consent calendar at 5 p.m. on Tuesday. 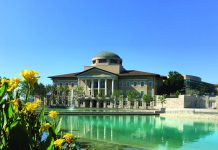