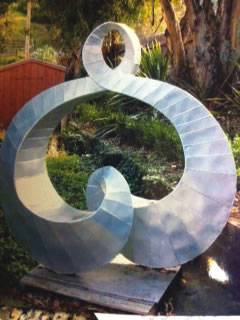 A new mural based on the word “Wonder” was unanimously approved by the Arts Commission on Monday to replace one eradicated last February by Marlowe Huber, co-proprietor of the Laguna Canyon Winery.

Laguna College of Art instructor Mia Tavonatti and her class of 10 students will begin work on the 13 x 75 foot mural depicting the wonders of the ocean and of nature as soon as the City Council sanctions the project.

The mural is based on a word chosen by residents of Laguna Beach and surrounding communities that best describes the town’s leading attribute.

Tavonatti hopes to have the project finished by December. “It’s a two semester class but we will try to move things along faster as not to leave an unsightly area over the summer,” she said. “We will make sure that there are enough areas that are totally complete.”

Singapore native Cheryl Kook created the winning design, centered on a child looking into a magical ocean environment. She said that as students, wonder comes easy but in adulthood one loses that very sense. “We want to bring wonder back into the community,” she said. “It really is a wonder,” said Mayor Jane Egly.

But for another project, it’s back to the drawing board, again. During its Feb. 27 meeting, the commission found submitted designs for a Heisler Park bench attractive but lacked adequate reference to the nearby Junior Lifeguard station. The use of glass was approved by the commission asked the artist team of Gavin Heath and Larry Gill was artist Malcolm Jones to give the design another go around.

The commission also re-opened discussions over the fate of “Cathexis,” the Steven Harmon sculpture removed from Riddle Field due to weathering and its potential as a public hazard. While last month, the commission had unanimously voted to de-accession the piece from the public art collection, an appeal by the artist’s mother, Alice Harmon, apparently upended the decision.

Earlier this month, the commission approved restoration of the piece with original materials after Harmon offered to fund restoration and post-installation future  maintenance.

The city has made three repairs costing $3,000 and is unwilling to do more, said city arts manager Sian Poeschl.