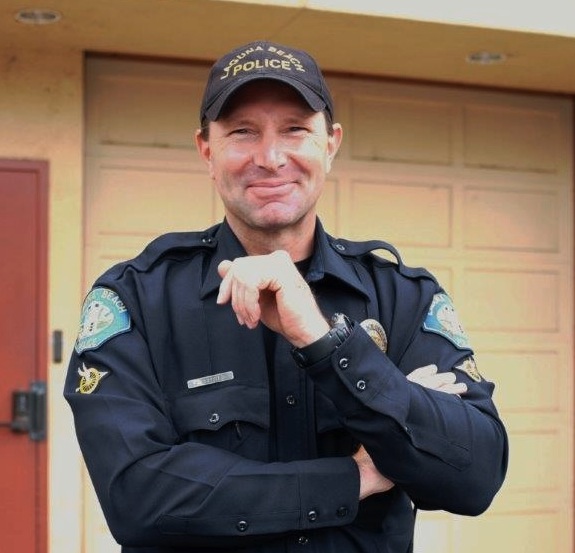 A 42-year-old Laguna Beach police officer and Iraq war veteran was tragically killed in a traffic collision late Saturday, Sept. 21, the department’s second death of an officer in the line of duty in 60 years.

Jon Coutchie, a four-year officer with the department who was assigned to motor patrol earlier this year, died after being struck by a pickup turning left onto Coast Highway at Cleo Street shortly before midnight, police Capt. Jason Kravetz said.

Coutchie had been northbound on Coast Highway in search of a car reported speeding through the downtown area that had eluded another officer, said Kravetz, who added that the motorcycle officer was not engaged in a high speed pursuit. The driver of a pickup turned left at Cleo Street and collided with the officer, Kravetz said.

The motorist, who was not arrested, is cooperating with the California Highway Patrol, which is investigating the incident. The investigator could not be reached immediately for comment.

“The department’s devastated,” Kravetz said. “Nobody’s ever gone through this.” The previous on-duty death in the department of 47 sworn officers was the shooting of Gordon French in 1953, whose fatal injury instigated the building of a local hospital.

Couchie, a native of Tucson, Ariz., grew up in Orange County where he graduated from Laguna Hills High School in 1989. After the terrorist attacks of Sept. 11, 2001, he enlisted for military service and became an Army Ranger, and completed tours of duty in Iraq and Afghanistan from 2003-2007.

After receiving an honorable discharge, Coutchie applied to the department for a job as a part-time jailer. Seeing his potential, the department sponsored his training at Huntington Beach’s  Golden West Police Academy in 2008. He completed training the following year and was sworn in as a Laguna officer, said a department statement.

Coutchie showed a passion for traffic issues and displayed an early expertise in accident investigation.  Following this interest, he applied and was selected for one of the coveted motor officer positions in March.

After the arriving officers saw that Coutchie had succumbed to his injuries, one of them ran into a local Ralph’s Market and grabbed an American flag and draped his body, as an honor to his sacrifice as an Army Ranger and police officer, the statement said.

“We will forever miss and love Jon here at the Police Department and will grieve along with the citizens of this community,” Kravetz’ statement said.

Coutchie is survived by his parents, a brother, step-sister and loving girlfriend.

Memorials have already sprung up at the Cleo intersection and in the department’s lobby.