It’s faded and cracked from the elements, and the hand is missing a thumb. Even so, the sculpture of Eiler Larsen, the Danish vagabond who metamorphosed into the revered Laguna Beach greeter, still draws throngs of visitors who pass his corner at Forest Ave and Coast Highway 41 years after his death in 1975.

Tourists pause to read his commemorative plaque and pose for selfies while longtime residents remember a character who tried to light up everyone’s daily life.

Sculptor Guy Angelo Wilson is intent on restoring the likeness he carved from aged redwood to its former glory and recently contacted local Martin Yewchuk, who recently produced a film documentary about the four men, including Larsen, that took on the task of welcoming Laguna’s visitors over the last century.

How the statue came into being is almost as colorful as its subject.

Bearded, with shoulder-length hair and typically wearing a lumberjack’s shirt with blue pants or overalls, Larsen became a fixture with his cheerily booming “Helloooo” and wave at passersby.

That depiction is how Wilson carved him in 1985 from an 800-year-old redwood log fished from the Big River at Mendocino. “I first heard about sinker logs, logs that have been at the bottom of the river for a long time, while giving wood carving demonstrations for Paul Bunyan Day in the vicinity of Fort Bragg,” explained Wilson, now of Portland, Ore.

After seeing how well the tree, with its dense texture and tightly formed rings, had aged, Wilson acquired the log. “It’s beautiful wood with a purplish tinge, used for the finest grade of furniture, even if it smells like a musty attic,” he recalled. “At the time I was not even thinking about Eiler being born the same year, 1890, that the tree was cut down and branded, but later it occurred to me that this was indeed Eiler’s log,” said Wilson.

Having just received the private commission to produce Larsen’s likeness, Wilson carted the historic piece of wood to his former studio in Santa Fe Springs and went to work. “I had done a lot of research on Eiler and found that he was a voracious reader, always carrying a book and a pencil in his jacket pocket,” he said.

As for his facial features, they are modeled on old photographs of Larsen and Luther, an 80-something fellow student at Cal State Long Beach working toward a master’s degree in gerontology, who filled in to pose for facial expressions and gestures, recalled Wilson.

After Wilson formed a clay likeness and carved a wood maquette, he went to work on the six-foot statue, carving the wood and re-enforcing limbs with a stainless steel skeleton. Today, he is willing to sacrifice the wooden maquette to re-create Larsen’s missing thumb. “It’s carved from the same log, so the wood will match,” he explained. He also plans to re-coat the figure with a mixture of oil and turpentine. “I don’t want to put layers of varnish on it because they dull the sharpness of carved lines.”

The owner of the Greeter’s Corner Restaurant first approached Wilson about the commission while he worked in a friend’s studio carving tiki statuettes for Oceanic Arts, a Whittier enterprise specializing in Polynesian decor. Statuary at Disneyland’s original Tiki Room attraction, which was redone in 2005, bore Wilson’s imprimatur. “I used to get paid by the foot for the tikis,” said Wilson, which provided his livelihood while earning a bachelor’s degree in fine art at CSLB. He earned a master’s with an emphasis on sculpture and installation at the Claremont Graduate School.

Promotion of the “Greeter Documentary,” which will screen again Wednesday, April 20, at the Forum Theater on the Festival of Arts grounds, helped Wilson connect with the filmmaker and kindle interest by the restaurant’s owner in repairing the statue, according to Yewchuk. It’s also revived interest in an older, cement-cast version of Eiler Larsen by Charles Beauvais, located at the corner of Coast Highway and Brooks Street. There, the latest incarnation of greeters lives on in Michael Minutoli, who shouts out greetings sporting white gloves, a captain’s hat and earphones tuned to dance tunes.

Larsen died on March 19, 1975, just a week shy of his 85th birthday on March 27, and Wilson expresses amazement at the longevity of his legacy. “Sometimes I look for him still on the internet and I am amazed at pictures of the statue surrounded by people standing around him and waving. He’s still doing his thing.” 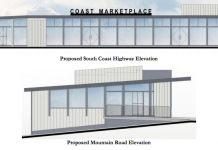