Western, (8-1, 1-0) ranked #7 in D10, was supposed to easily roll over the Breakers in last Friday night’s league showdown at Guyer Field, and early in the second quarter, it looked like the expected runaway for the Pioneers, with the visitors holding a 21-0 lead. Western had recorded six shutouts in their previous eight games this year and were expecting to do the same to Laguna.

The contest opened with the Pioneers rolling 70 yards in five plays, scoring on an easy 29-yard pass play. Laguna’s first possession was a struggle with three of the rushing plays gaining zero yards in the seven-play possession. Western’s second try was only stopped when the Pioneers were penalized 15 yards and just missed getting their third first down of the series when a pass was forced by the Laguna defense.

Breakers’ next possession ended quickly as Andrew Johnson’s toss was picked off on the Laguna 12-yard line and returned for a quick touchdown. The Breakers got the ball back with great field position on the Western 38 after a botched pooch kick and Pioneer penalty. Still, the visitor’s defense stopped the Breakers on downs but the fourth down try—a sprinting Raul Villalobos just missing a sure cross-field TD catch was viewed by many as Laguna’s one chance to score and avoid a shut-out, not a prelude to what was to follow.

Western took over the ball after the incompletion and on their next play, set up their third score with an easy 60-yard run. Three plays later it was 21-0.

Laguna’s first possession of the second period looked as frustrating as the first period tries, when on a second down from the 50, Villalobos caught the ball midfield at the 40, then wrestled out of the grips of the defender to sprint 38 yards for the score. The balance of the quarter then became a shootout with each team scoring on big plays, ending as a 35-21 Pioneer advantage.

In the second half, Laguna got the initial kickoff and scored on another big pass play to trail 35-28. Western came right back and appeared to score again when they fumbled an apparent touchdown run out of the endzone. After a long Laguna drive produced no points, the Pioneers scored on an 11-play possession resulting in a touchdown early in the final period providing a 42-28 lead.

Breakers fought back on two big runs by Tyler Fields that took Laguna to the Pioneer 2. At that point, the acclaimed defense of the visitors took over, finally forcing the Breakers a fourth and 16 last chance. Andrew Johnson found Jack Pigott for a score, and Laguna’s spirits picked up. Breakers then held Western to a rare three plays and a punt, taking over on the Breaker 16. After an incomplete and a holding penalty, Johnson went deep with a perfect pass to Villalobos on the Laguna 35-yard mark and Raul just exploded out of the grasp of the Pioneer defender to race untouched the remaining 55 yards to tie the game with just under five minutes remaining.

Western then used the clock slowly to grind out a long drive and as Laguna’s defense appeared to stop them, they went big, scoring on a 33-yard-fourth down pass play with just 48 seconds remaining.

Game over? Not for this Laguna team. From the Laguna 22, Johnson hit Jack Pigott for 23, Jack Crawford on a lateral pass for five. Then two passes to Villalobos for 19 and 12 yards brought Laguna to the Pioneer 19. A 10-yard desperation quarterback run followed by a draw by Tyler Fields left Laguna once last play—that’s when Andrew Johnson found Pigott in the endzone with two seconds left.

Laguna opted to go for the tie and overtime—a move that can always be second guessed. Western scored first in the overtime on two plays, while Laguna got down to the Western 11 and failed on three pass plays for the Pioneer win.

Up Next: Laguna’s final 2019 regular season Golden West Conference – Pac 4 contest is Friday, Nov. 1, at Ocean View, with the winner advancing to the D12 playoffs and the loser most likely having their season conclude. Laguna Stats and the schedule is at MaxPreps.com.

Boys JV ran in the Riverside Invitational, otherwise the squad was idle, with the Sunset Conference league meet looming this Saturday at Central Park in Huntington Beach. Meet starts at 8 a.m. The top two league teams in each of the Sunset Wave and Sunset Surf leagues advance to the SSCIF preliminaries as wells, as all teams ranked in the top 16 in two of the final four section polls. The top 24 teams from the prelims advance to the CIF Finals to be held on Nov. 24. Laguna Boys, the defending D4 champions, have advanced to the finals the past 20 seasons, and the girls the past 16.

The league tie breaker to determine the automatic CIF team playoff qualifier for D2 came down to the games won/lost combined for the two league matches played. Both set scores were 11-7 but the squads tied in games 71-71 in their first meeting, and Laguna held a 75-60 margin on Monday. League individuals were held this week at Marina and the team playoff brackets will post on Monday, Nov. 4, at 11 a.m. at www.cifss.org.= 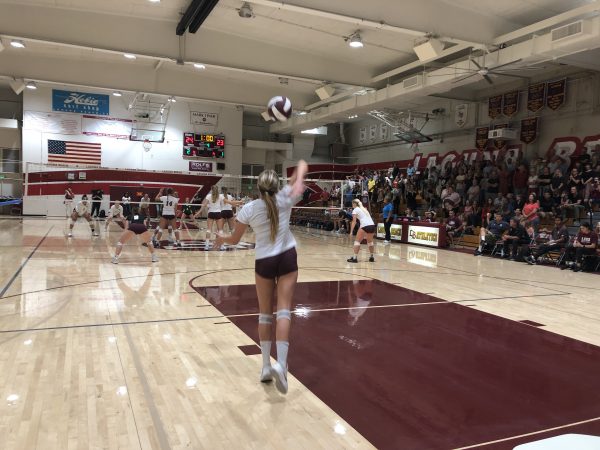 The State playoffs will be announced about 5 p.m. on Sunday on www.cifstate.org, with Laguna’s opening match slated for Tuesday, Nov. 12.

You can follow the team on Instagram at lbhsvarsitygirlsvb and statistics are posted on Max Preps. Also catch the individual match video highlights by searching for “Laguna Beach Girls Volleyball” on the search tab at www.hudl.com.

Breakers will be hosting a boy’s high school tournament on Thursday, Nov. 14, noon to 6 p.m. at Main Beach, including longtime rival, Newport Harbor.

Laguna had one league match last week as they battled Huntington Beach (16-8, 3-2) for three quarters before fading in the final minutes suffering an 8-10 loss. William Kelly and James Molan each had three goals in the effort.

The regular season concludes with a Sunset Surf League game on Oct. 30 against #1 Newport Harbor, and a non-league crossover contest with Los Alamitos (15-6) on Nov. 1.

Playoff brackets will be released on Saturday, Nov. 2, at cifss.org with Laguna hoping for an at-large placement in D2.

Baseball’s Jackson Rees was recently nominated for minor league baseball’s “Relief Pitcher of the Year” after a successful year in A level ball for the Blue Jays organization. Rees appeared in 39 games, 61 2/3 innings with a 0.73 ERA, 88 strikeouts and 9 saves. He signed with the Jays as a free agent in 2018 after a career at Saddleback (2016) and Hawaii (2017-18). Rees was the 2013 Orange Coast League “Most Valuable Player” and still ranks #3 in career wins as a pitcher at Laguna Beach High School.