By Justine Amodeo, Special to the Independent

At the Laguna College of Art + Design, which is celebrating their commencement Friday, graduates can expect an online experience that reflects the nature of the artistic education they received.

LCAD President Jonathan Burke explained that because members of the class of 2020 are spread out across the world with access to different levels of technology, rather than presenting a live-stream Zoom graduation, administrators, faculty and students have contributed to a video that has been edited for each LCAD family.

“It will be as if [all of us] were on the dais calling out each student’s name in their major,” said Burke. “We are putting it on a private YouTube channel where everyone can celebrate together. There is less opportunity for technology to go wrong if it’s edited and produced like a movie.”

Also digital for the first time is LCAD’s Industry Open House, an annual event for graduating seniors entering the job market which offers introductions to companies that are hiring. This year’s virtual open house include recruiters from more than 45 companies. While the class of 2020 is entering the worst job market since the Great Depression, LCAD majors—animation, game art, graphic design and digital media and entertainment design among them—“are mostly resilient to the pandemic,” Burke said.

Many LCAD seniors have skills that can be put to work remotely, so they are in demand, he said.

“The entertainment industry is hiring and we know that in video games, the developers and publishers are still maintaining operations with employees working from home,” Burke said. “Online gaming is seeing record numbers of players.”

LCAD’s Career Services is also connected with other businesses in banking, insurance, and health care. For 17 years, the Industry Open House has drawn representatives from creative industries “looking for the next generation of creative talent,” Burke said. Usually, representatives from these companies interview graduating seniors and review their portfolios for internships and jobs. Because it’s a virtual, by-appointment format this year, Burke explained that a lot of companies that wouldn’t normally travel to Laguna Beach are participating.

Netflix, Disney TV Animation, Taco Bell, Mazda, DC Comics, Sony Pictures Animation, Blizzard Entertainment and Cartoon Network are among the participating companies,  Burke said. The Open House, which used to be one day, went live on the web on Tuesday and will be up indefinitely.

“Our fine arts grads are also in demand as art instructors, muralists, portrait painters and illustrators,” he said.

Tyler Letson, 23, an LCAD animation graduate has been a full-time student while also working as a storyboard artist for digital media studio pocket.watch and animation company Cartuna.

“It’s all remote contract work while I’m working towards my degree in animation with a minor in creative writing and it’s wrapping up soon,” Letson said. “I’m looking to work for bigger companies and I’d like to get my portfolio in front of them.”

The Industry Open House going digital is beneficial for employers, he said, “because instead of having to take a flight here, everything is being sent to them and they can review portfolios at home at their leisure.”

For example, the stop motion animation company Laika that produced the movies Coraline, ParaNorman and the Golden Globe Award-winning Missing Link, is based in Oregon and would not normally travel to Laguna Beach to review portfolios. This year they can virtually participate.

“They’ll have to watch on Zoom,” he said. “It’s definitely a letdown and I wish we could have an in person commencement but I think the school is doing the best they can under the  circumstances.”

In his part of the commencement address, Burke tells graduating seniors that the value of their diplomas and “distinctive and creative body of art” remains untouched.

“The LCAD faculty of artists, designers and scholars are dedicated and passionate about imparting relevant skills and knowledge,” Burke tells seniors and families. “They want you to continue to strive to new levels of creative accomplishments and apply the skills you have learned to assist you throughout your life.” 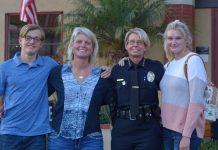 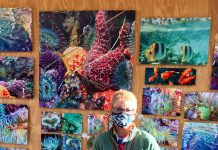