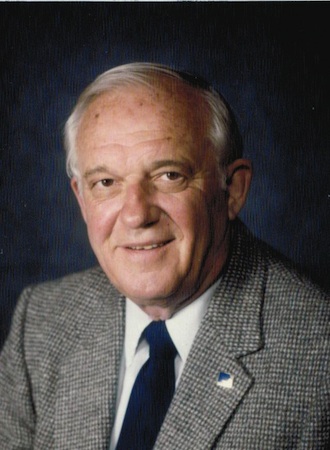 Martin was born in Seattle, Wash., on July 19, 1925, the oldest son of Martin J. Miller and Teresa E. Miller. A life-long Catholic, he attended St. Alphonsus Grade School and O’Dea High School graduating in 1943. At the time, the U.S. Navy offered officer candidate tests at high schools around the country.

Marty passed and joined the Navy on July 1, 1943, and was sent to Gonzaga University, in Spokane, Wash., with 300 others. There, Miller enrolled in pre-medical and pre-dental courses and was sent to University of Detroit Dental School. The Navy discontinued the V-12 program after his first semester and he was sent to Great Lakes Naval Station. He was discharged May 18, 1946 still in the Naval Reserves.

Miller then applied to a new school of dentistry at the University of Washington and was accepted into the first class in 1946 and graduated in 1950.

After graduating, he practiced dentistry for nine months in Selah, Wash. He was then recalled to duty as a Naval dentist, with a rank of lieutenant junior grade, attached to the Marine Corps Fleet Marine Force. He took the California dental board and upon honorable discharge in 1955 opened a practice in Anaheim, where he worked for 38 years.

A great athlete and avid sports fan, Miller loved following and cheering for his beloved Gonzaga Bulldogs and University of Washington Huskies. After retiring, he volunteered to coach elementary and junior high athletics for more than a decade at St. Catherine of Sienna School in Laguna Beach.

He will be greatly missed by all who knew him and enjoyed his sense of humor and endearing personality.

In lieu of flowers, it would be greatly appreciated if any donations were made to Evergreen Hospice Care, Inc. located at 17215 Studebaker Rd., Suite # 100, Cerritos, CA 90703.