Twice each year, thousands of Pacific gray whales closely follow the coast and pass by Laguna Beach. This is the longest seasonal migration known as they travel more than 14,000 miles roundtrip between their winter warm-water breeding grounds in the lagoons of Baja California and their summer cold-water feeding grounds in the Bering Sea and Chukchi Sea in the Arctic.  Now traveling north, they are coming especially close to shore in the largest numbers seen in years.  The whales depart the southern waters in stages, with most males, newly impregnated females and juveniles leaving first and mothers with new calves following.  In October and November, as the Bering Sea starts to freeze, the journey is reversed and the whales travel south.  Pregnant females leave first followed by non-pregnant females and males.  The last to leave are the remaining immature whales of either sex.  Each trip takes about 12 weeks. 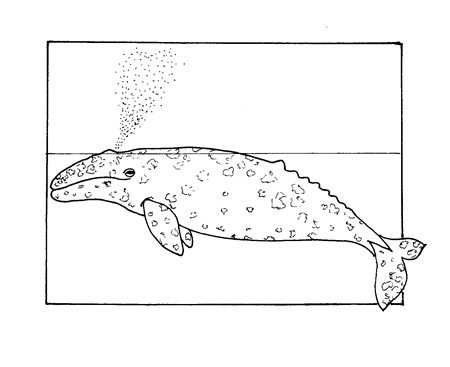 The Pacific gray whale (Eschrichtius robustus) averages about 45 feet in length and weighs over 30 tons. The female is slightly larger than the male. Its streamlined body is dark gray in color, mottled with light gray and white scarring, patches from barnacles surrounded with pinkish whale lice encrustations. It has been found that they host more external parasites than any other cetacean. The whale has two small, paddle-shaped pectoral flippers but lacks a dorsal (top) fin. Instead, it has a dorsal ridge 2/3 of the way down its body that includes six to 14 crenulations or “knuckles” leading to its tail. The tail is approximately 20 feet tip to tip and consists of two flukes deeply notched where they meet in the center. The whale has double blow holes that create blows that reach over 10 feet high and are distinctively heart shaped. Able to stay under over 20 minutes, they typically surface every 3-6 minutes and blow 3-5 times in a row before diving again.  The lifespan of a gray whale is estimated between 40 to 80 years and their only predator is the orca, or killer whale.

Belonging to the baleen whale family, the gray whale has ivory colored baleen plates instead of teeth hanging from the upper jaw that filter a diet primarily consisting of benthic (buried in the sea floor) and epibenthic (living on the sea floor) creatures that are found in great abundance in the shallow, nutrient rich coastal waters of the Bering Sea. Obtaining most of its food in the Arctic during the summer months, they feed by scooping mouthfuls of sediment from the bottom of the ocean floor, forcing it through their baleen plates, trapping the anthropods, invertebrates, crustaceans and mollusks, which they then ingest. This leaves acres of pits or depressions on the sea floor.  Curiously, most of the whales roll onto their right side to collect sediment, which is the reason the right side of their baleen is worn down more than the left and occasionally accounts for right eye blindness in older whales. Because of the blubber reserves built up in the summer, minimal feeding is done in the Baja lagoons and during migration.  What little feeding occurs is opportunistic in kelp beds.

Recent studies indicate that gray whales enter sexual maturity once they reach eight to 12 years of age. Believed to mate with multiple breeding partners in the lagoons of Baja California and sometimes during their southbound migration, they give birth every other year after a 13 month gestation.  Once thought only to give birth in the warm Baja lagoons, it has now been found that 40% of all births happen during the southern migration. Bearing a single calf that is born tail first, the mother supports the calf on the water surface and nurses it for over seven months with a diet of milk that is over 53% butter fat and the consistency of cottage cheese. Mother and calf tend to stay together for about two years.

There were once three distinct populations of grey whales. The North Atlantic population became extinct in the early 1700’s, due to over-hunting.  In the Pacific, two populations exist.  Gray whales located in the western Pacific migrate between the South China Sea and Russia. They are critically endangered from hunting and now number only about 100 individuals. It is probable that the birth rate is too low to sustain this population. The eastern Pacific population that we observe migrating along the California coast has twice been endangered from hunting. But with no commercial whaling since 1946 and with further protections for marine mammals in American waters, the population rebounded and numbers around 23,000 today. In 1993, it was removed from the endangered species list but it continues to be protected by the Marine Mammal Protection Act.

Now through much of May, we will have many opportunities to enjoy the animals in Laguna Beach.  Perfect viewing sites include Crescent Bay Point Park, Heisler Park, Brown’s Park between Laguna Avenue and Legion and the Treasure Island Park at the Montage among others.  For further information, see http://acsonline.org/fact-sheets/gray-whale/.