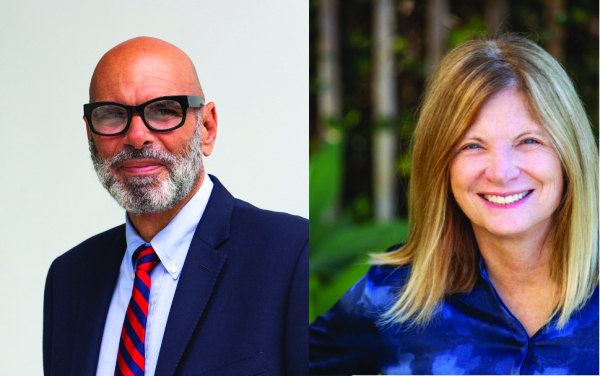 Born in Fort Wayne, Indiana, Kempf moved to California where she received a Master’s degree in business. She began a management career in technology, and retired as President of Mirion Technologies in 2017. After moving to Laguna with her wife, Cheryl Sykes, in 2006, Kempf served on the View Preservation Committee, the Emergency Disaster Preparedness Committee, the Economic Development Task Force, and the Planning Commission before being elected to City Council in 2018.

While serving, she said her greatest accomplishments were the creation of a Fire Mitigation Plan, state-of-the-art ambulance service, the downtown Promenade, a Neighborhood & Environmental Protection Plan, an Accessory Dwelling Unit ordinance and Downtown Specific Plan, the work to strengthen development restrictions on height, mass, and scale.

If re-elected, Kempf’s priorities for the next four years would be to underground Laguna Canyon Road for safety, implement a comprehensive Climate Action Plan, pass the City’s first Master Parking Plan, make the best use of the St. Catherine’s school property and build affordable housing.

Kempf said that one of the main reasons she’s running is because she understands how City government works.

“I’ve been working with other outside agencies for grants and other improvements to Laguna Beach, and I’m good at that. And I have a good temperament to serve the community. I’m an issue-focused and fact-based person. I always have been. I can look at things dispassionately as issues before the city council. You don’t see me getting emotional. You don’t see outbursts from me. I always keep the community at the forefront of my mind. Serving on City Council is a serious job for serious people.”

Kempf has received endorsements from Planned Parenthood of Orange and the Laguna Beach Firefighters Association.

Councilmember Peter Blake moved to Laguna Beach in 1986 and got his footing as a local waiter before eventually opening up his current art gallery soon after. In 2018, Blake said he became increasingly frustrated with the increase in low-level crime, lack of property rights, and the inability of young people to open a business.

“I was complaining to my wife one day, and she said, ‘why don’t you do something about it? Why don’t you run for office?’ I never imagined that I would be a politician,” Blake said. “As it’s pretty obvious in the way I write and the way I talk to people. I have a hot temper. I speak my mind and I don’t care what anybody thinks. I’ve been playing chicken with the voters for four and a half years. They want to vote for me. They vote for me on my terms, or else they don’t vote for me.”

Since his four years in office, Blake is proud of initiating the single-use plastic ban, reducing homelessness by 60 percent, fighting for property rights, free speech as well as including American flag imagery on Laguna Beach Police cars. City’s efforts in increased engagement during African American History Month. He is running on a similar platform this time and continues advocating for better dining and retail experiences.

“I love this town being quaint, but that doesn’t mean it has to be some hokey tourist trap town,” Blake said. “I don’t understand why we can’t have better galleries, why we can’t have a better restaurant, better clothing stores, better everything. That’s what we need.”

“Q an attempt to usurp the voter and to take control of this community via ballot box planning and a ballot initiative,” Blake said. “That pretty much takes us back to the days when Village Laguna controlled this community.”