Some older works in the Laguna Art Museum’s permanent collection of California art date from the mid 19th century.

But no special funds had ever been earmarked specifically for framing and conservation until Yvonne J. Boseker pledged a $100,000 nest egg. The funds will also underwrite the staging of exhibitions and educational programs related to early California art.

Boseker, who has homes in Laguna Beach and Santa Ana, was the first local collector executive director Malcolm Warner met after taking the museum’s helm last January. “Yvonne mentioned to me that helping the museum with conservation of our collection would be close to her heart. She cares about conservation and knows the issues surrounding it,” he said.

Boseker is an avid collector of the period and a museum supporter since the 1980s. She and her late husband Edward in 1986 lent several works from their collection to an exhibition titled “Early Artists in Laguna Beach.” Spanning between 1856 to the 1940s, their collection of 200 works by 175 California artists has been described as encyclopedic.

Two paintings from the Boseker collection, “Dana Point,” 1887 by Frank Heath and “Mexican Cattle Drivers,” 1883 are on loan to the museum and on display in the current exhibition of selections from the permanent collection. Boseker also helped underwrite the recent comprehensive Clarence Hinkle retrospective exhibition, said Ed Fosmire, the museum’s deputy director.

Her gift is already being put to good use, with six paintings currently at a conservator, said Fosmire, noting that conservation rarely attracts high-profile donors. “It has definitely been an area of need,” he added.

“As caretaker it is our responsibility to take excellent care of [art] and to always be willing to share it with others…,” Boseker said in a statement.

The museum also received a $10,000 grant from the Pacific Life Foundation and $4,000 from the Laguna Beach Community Foundation. Both grants are to support the museum’s Thursday night community outreach programs. Lectures and presentations have attracted larger and younger audiences.

“It’s better to attract support by doing something than just making pleas for support,” said Warner. 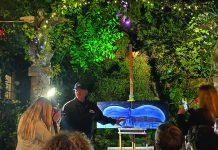