It is really hard to describe art, and even harder to describe the art of Laguna’s Jorg Dubin.

Some of his portraiture images are so graphically disturbing they could be labeled pornographic. The image could be of a woman so brutally sexualized you wonder why she would allow it.   Or look at one of his images of Mexican street fighters, their faces beat to a pulp, you think, why?

But then look three cuts below the surface and you see soul-scathing truth.  You see the real person hiding underneath the always-present façade.  You see the woman’s fiercely carnal sexuality: this is who I am, deal with it; you see the fighter’s ungodly desperation to succeed despite a destroyed face.

You see their inner reality.

Nine years ago, I commissioned Jorg to paint my three children, then 20, 18 and 13, and the children hated it.  They are poised together in the two-thirds human size painting. Liz, the oldest and already off to college, was standing slightly apart, aloof, and gazing at you in a challenge: do not screw with me, ever.  The second oldest, Gabby, is almost serene, in control and knowing she is in control, her right arm draped on her younger brother’s shoulder: hey little brother, you’re mine.   Then there is youngest, Harrison, the 13-year old man-child showing his oats but with a cowlick, looking off to the side: I’m not here.

Today, nine years later, all three love the image, but at the time they loathed it. Jorg has repeated this with hundreds of people, and his client list keeps growing. That is because his gift is intuiting, with absolute clarity, your essence.  It is not a guess.  He nailsyou.

Then there is his other art: ceramics, sculptures, public art in the form of benches. One sculpture, the city’s 9/11 memorial in Heisler Park, is a masterpiece. It consists of two fragments of steel beams from the Twin  Towers, partially covered in the original concrete, crossed at the top as though blown into a cruel embrace.  At the bottom, centered, is a stainless steel globe approximately 30 inches in diameter.  It is a mirror.   If you get close enough, you see yourself.  But you have to bend low, and suddenly you are under the beams and you are trapped.  It is claustrophobic and it is terrifying.

Dubin is that good.

Now he is at work on a monumentally sized sculpture.   It is another stainless steel mirrored piece, but five stories tall and to be located at a prominent corner in a Jamboree Road apartment complex in Irvine, where I am one of the owners.  The complex is meant to be architecturally significant and classically timeless.  It does not need another boring “prominent corner” architectural “hat.”  It needs real art.  It needs Jorg. 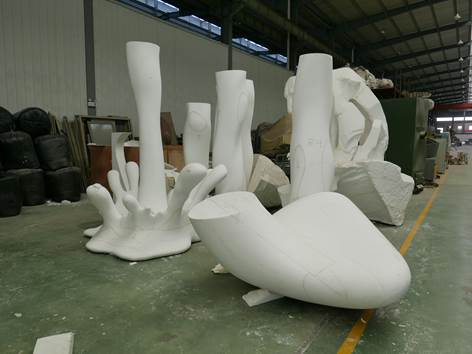 After two months of deliberation, Jorg created a piece called “Mercury Falling.” It will be—when finished—a mirrored stainless steel liquid puddle that is boiling over. It begins at the top of the building’s corner some 60 feet in the air.  The puddle’s overflow slowly oozes down the corner in a sinuous semi-spiral until it splashes on the sidewalk below.  From ground level, you will see the splash and you will look up toward the top. Along the way, you will find the mirrored steel reflecting the skies above, the colors, clouds, and the infinite.

As you read this, Jorg Dubin is in China where the piece is being fabricated.  He is there to make sure the sculpture is perfect.  It is tough and exacting. First, there is the hard-foam mold made exactly like the finished sculpture from which the mirrored-steel forms will be created.

Then there is the actual fabrication.  It comes in several pieces that will be shipped in a container from China. The pieces will be assembled on site and welded together, then buffed to the mirror finish.  There is little room for error.  The work must come within a quarter inch of the specifications.

By late October “Mercury Falling” will be installed.  It will blow you away.

Michael Ray grew up in Corona del Mar and lives in Laguna Beach. He is a real estate entrepreneur involved in many non-profits.