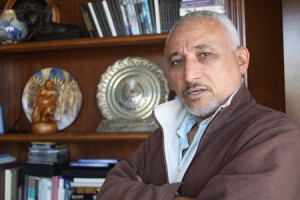 This week, Laguna Beach’s A. Omar Turbi learned a U.S. Navy hospital ship will shift its heading towards Malta, an island state in the Mediterranean, 150 miles north of Tripoli, Libya’s capital.

Despite a promise of help from Arizona’s U.S. Senator John McCain during a visit to the recently liberated capital in September, medical aid had yet to materialize for the 26,000 civilians who have suffered injuries since Libya’s uprising began in February.

The ship’s anticipated arrival, which has yet to be announced, was at least partly steered by Turbi, a native of Derna, Libya, a longtime member of the Libyan opposition and now an advisor to the nation’s newly established 90-member National Transitional Council.

With years of experience lobbying for intervention in Libya as a human-rights advocate in exile, Turbi knows where to turn for an assist. He turned up the pressure on McCain and others as well as Congressman Ed Royce, Republican of Fullerton, to fulfill the pledge.

“That gives me great satisfaction,” said Turbi, whose expertise on Libya’s issues and dialogue with the former regime has catapulted him to prominence as a Libya expert whenever the nation resurfaced as a foreign policy hotspot.

In 1999 and again in 2004, he testified about his homeland before U.S. Congressional committees. Throughout the Tunisian, Egyptian and Libyan uprisings this year, he’s provided insights on the revolution and Libya’s future to national news organizations such as CNN and Al Jezeera and helped draft a House resolution recognizing the Transitional National Council in March. He’s no less in demand now in the wake of the death last week of the Libyan dictator, Muammar Gaddafi.

During an interview Wednesday, Turbi was interrupted by a call from the BBC, inquiring whether he could confirm the capture of one of Gaddafi’s sons. “Why in the world can’t the NTC detain them and turn them over or try them? It doesn’t bode well as the strength of a new government.”

His comment suggests at least one reason for his reluctance to accept a role in a future Libyan government, which he says he’s been asked to do. “Public service means you’re under scrutiny, you give up big portions of your life, you’re subject to criticism,” said Turbi, who gave up Libyan citizenship to became a U.S. citizen in the 1980s. His wife, Renee, is also a U.S. citizen. They have three adult children and have lived in Laguna nine years.

Turbi came to the U.S. 30 years ago, earning an engineering degree from the University of Wisconsin. He worked for IBM and Motorola before founding Irvine-based Orbit Systems Inc., a privately owned maker and distributor of computer products.

Half his time and treasure, though, are lavished on the Libyan Human Rights Commission, self-funded by himself and two other fellow ex-patriots since 1985 to promote human-rights compliance in Libya. Based in Washington, D.C., the commission hopes to relocate its headquarters to Benghazi, Libya, according to its website.

The non-profit’s founding was preceded by the arbitrary imprisonment of two Turbi brothers, one of them who has detained for 17 years. Through its campaigns and appeals at human rights conferences, and direct talks with the regime, the commission helped 400 imprisoned Libyans, including one of his siblings, secure political asylum in 2000, said Turbi, who credits others with also contributing to the effort. Another brother was freed earlier.

“When you live in America, it’s not easy to extract yourself and the life of your family and kids,” said Turbi, whose biography says he also turned aside government posts offered by the former regime. “I’m still torn between two cultures, but I can get a lot done from right here.”

Change over the last nine years, fueled by cell phones, the Internet and the return of exiles ignited Libya’s revolution, but its future remains, Turbi said. “Signs are not indicating we’ll see a democracy emerge. Libya has nothing in the way of institutions. It’s beyond zero. It’s a mess.”