By Andrea Primer, Special to the Independent

Laguna Beach prepares for the 47th annual Patriots Day Parade this Saturday, March 2, a day when the community is celebrated through art, pride and togetherness celebrating this year’s theme, “All Together Now”.

All those planning on visiting downtown Laguna should be prepared for road closures, traffic and more trouble than usual finding parking. Between 9 a.m. and 2 p.m., traffic will be heavily congested in the downtown, advises the city’s fire department. Coast Highway and Laguna Canyon Road will be open during the parade, but traffic will be heavily congested due to the surrounding road closures.

The projected weather forecast for the weekend is 81 degrees, prompting not only a fun filled day, but a beautiful one and a reason to break out the sunscreen.

Laguna Beach resident, Jennifer O’Neal, 42, says, “This will be my fifth year going to the parade. Every year is even more exciting than the last. My family and I love to go and see all the entries and also to spend the day appreciating where we live and the community of people we surround ourselves with.” 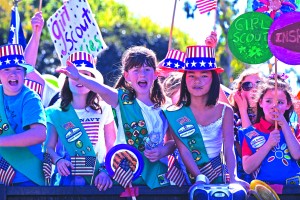 This year’s theme was selected after careful consideration by organizers. “As everyone in Laguna Beach knows, the annual Patriots Day Parade is not a political event,” said parade vice president, Charlie Quilter.  “Over the years, we have picked themes that remind us that patriotism comes in many forms and that the spirit of love of country and community should unify us, not divide us.  We respectfully suggest that 2013 be a time that we all work side-by-side toward the common goals that we aspire to as a united people.”

This year, along with the regular parade entries, there will be some new additions. The Laguna Beach chapter of Daughters of the American Revolution, one of the founders of the parade, will team up with Furnishing Hope, and include war-injured veterans as part of their entry. “Laguna Beach’s DAR chapter works with Furnishing Hope to help wounded warrior’s furnish their homes when they return,” said DAR’s Lori Savit. 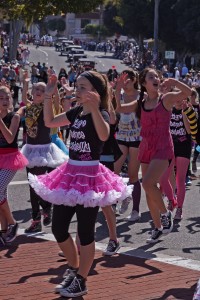 Another parade founder, Laguna’s Exchange Club, will spotlight local residents Skipper Carrillo and Sandi Werthe in their car, entry No. 24, as recipients of their “Golden Deeds” award. Carrillo received this award in 2006, and Werthe and her late husband, Hal Werthe, received it in 2012.

Along with these veteran parade entries are some new additions, many related to dogs.  Anything Canine, SoCal Pitbull Team, and the Pet Rescue Center, as well as Transition Laguna Beach and Growers First will all be showing their canine and community support with their entries.

The Laguna Beach business entries will be joined by parade honorees, who were awarded their respected titles during a brunch last month. The honorees include Capt. Jason Ehret, a U.S. Navy Seals, as grand marshall, Joseph A. Pursch as patriot of the year and Bonnie and Arnold Hano as citizens of the year.

This year’s parade line-up will include 97 entries, from restaurants, small businesses, musicians and many others. Once the parade is over, an awards ceremony will take place at the Art-A-Fair/Tivoli Too grounds.

The first parade, on Feb. 22, 1967, was created from a dream by Emily Ross for a parade that would, “instill in our youth love of country and respect for the Flag.”

Rivian’s Proposes Iconic Renovation of South Coast Cinemas with a Multi-Use Theatre, an Ocean-View Patio and an Electric Car Display