Brunhart, a retired Navy captain, spent 30 years managing and operating public utilities and infrastructure before joining the District as general manager in December 2013, as the state was entering one of the most profound droughts in history. Among other steps, Brunhart sent over 1,000 personal letters to customers who were using water 24 hours a day—a sure sign of a leak. He offered residents help in determining the cause of the leak at no charge. In the first five months, more than 750 customers repaired their leaks and saved an estimated total of 2.7 million gallons per month—enough water to serve 300 households each month. 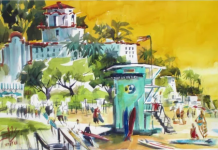