These words accompany roughly drawn images of a fighter jet spewing bombs, dissidents languishing behind bars and evil-faced humanoids, presumable members of the military-industrial complex, glower. The drawing evokes the marginal scribbles of a sixth grader, but the subject is anything but immature.

It is a protest created somewhere during the 1960s or ‘70s and part of a 20-year retrospective of drawings and paintings at the BC Space Gallery titled “Peter Carr: Pioneer of Protest.”

Harry Lawson Carr (1925-1981), known as Peter, founded the comparative literature department at Cal State Long Beach and for years lived in Laguna Beach. As a firebrand for individual creativity, environmental preservation and peace, he transformed many of his students into social activists.

The Peter Carr Peace Center was established after his death at age 56 and remained active throughout the early 2000’s. For a time, Carr’s essay “In the Summer We Went to the Mountains,” inspired the group towards environmentalism and preservation of California’s Native American culture.

Former Carr student Andrew Tonkovich, now a creative writing professor at UC Irvine, is co-editor with his wife Lisa Alvarez of a newly published “Orange County: A Literary Field Guide.” He credits Carr with his social awakening and has dedicated himself to preserving and cataloging his mentor’s writings and artistic output of roughly 2,000 works in hope of finding them a permanent home.

Carr’s works and a reading of his “Anthem: Aliso Creek” premiered at BC Space last month. Published by Berkeley-based Heyday, the anthology is a journey through Orange County’s history in writings by Joan Didion, Christopher Isherwood, Raul Alvarez and Jim Washburn among others.

“Peter painted and drew everything on anything, but did not take very good care of them,” remarked Tonkovich. He received the works from Carr’s partner Jeanie Bernstein, who helped establish the long-lived Saturday anti-war protest on Main Beach. Devastated by Carr’s death, she could no longer deal with the cache, Tonkovich said.

“Peter wanted to be acknowledged for his writing and painting, to be compared to the poet/writer Kenneth Patchen,” said Tonkovich. “He was a democratic socialist who strongly believed in public education and was always writing, painting, teaching, “ he added.

Much of Carr’s art focuses on his and Bernstein’s anti-war, anti-nuclear, environmental activism. A poster featuring a couple sitting in a VW bus set against San Onofre illustrates the iconic catch phrase of nuclear radiation not being good for fishes and other ocean going creatures.

Bernstein remained an activist on several fronts after Carr’s death in 1981. A 1987 Orange Coast magazine article describes her as “the mother of the peace movement in Orange County” and quotes her crediting Carr for the intensity of her continuous activism. Bernstein died in 2011 at age 88. The couple had lived in Laguna Beach near Aliso Creek, hence Carr’s essay.

Also on display is Carr’s “Survival Sunday II,” a black and white poster advertising a Hollywood Bowl benefit for the Southern California Alliance for Survival taking place on June 10, 1979. It featured among others Joan Baez, Jackson Browne and Graham Nash. Here, a racially and chronologically diverse group holds a sign “Stop Nuclear Terror.”

A watercolor painting features a group of determined protesters storming barricades surrounding the San Onofre nuclear plant. “It would have made Peter very happy to see San Onofre shut down,” said Tonkovich. Born in 1960, he had missed the first wave of anti-Vietnam war activism, but once in college embraced Carr’s idea that education should be in the service of peace and justice, he explained.

How then did the works finally land at BC Space? Roughly 40 years ago, Carr was among the first artists who brought works to be photographed to the gallery and photo lab operated by Mark Chamberlain and his partner, the late Jerry Burchfield. “I knew Peter fleetingly and Jeanie better from the days of The Tell,” said Chamberlain, referring to the 1989 photo wall that doubled as an anti-development mural erected in Laguna Canyon.

An acquaintance, UCI archivist Audra Eagle Yuan, told Chamberlain about Tonkovich and his archiving project. “It was a natural progression. Now we are keeping records. I have photographed all the pieces in the show,” he said.

Those who missed the opening have another chance to hear authors read their own work from “Orange County: A Literary Field Guide” and see Carr’s art.

Authors Linda Purdy and Lorene Delaney-Ullman will read May 13 at 2 p.m. in the Laguna Beach Library.            That afternoon, BC Space, 235 Forest Ave., will hold a closing party for the exhibit. Poets Chris Davidson, Stephanie Brown and Karen An-hwei Lee will read their contributions to the anthology. 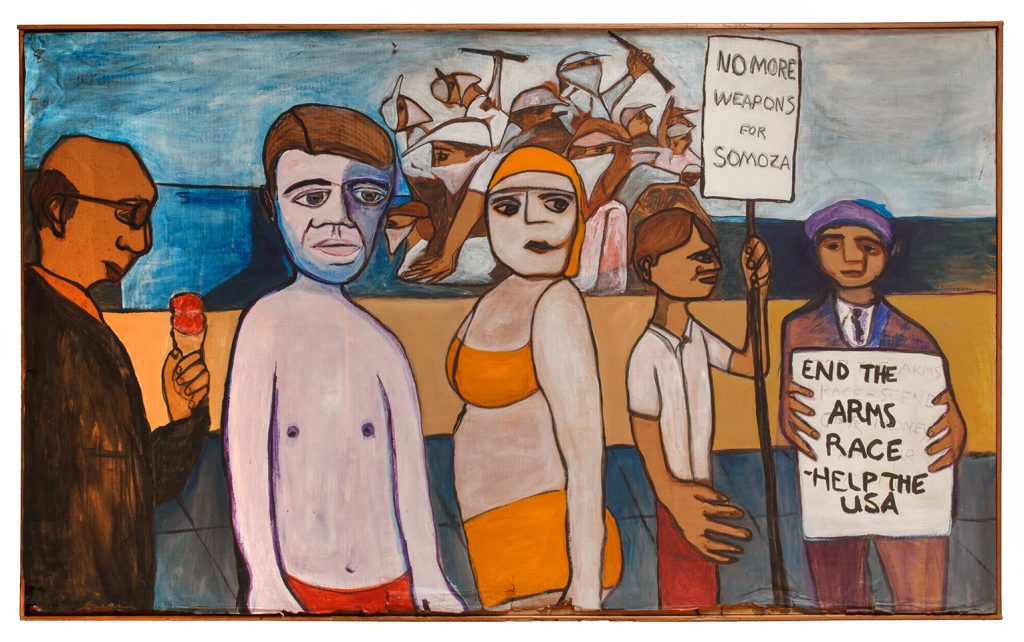