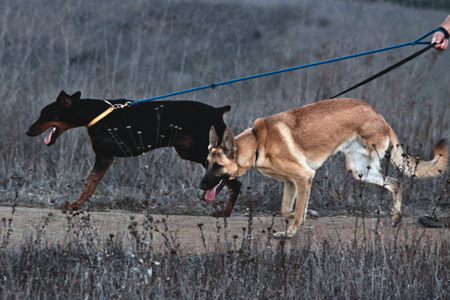 The city’s ban on the distribution of single-use plastic bags by retailers could pose a sticky situation for pet owners.

“I do know a lot of people use them for the purpose I think you’re asking me about,” said Mallory McCamant, past president of the Friends of the Laguna Beach Dog Park.  “Obviously, people are going to have to find another source.”

Marc Wright, who owns two three-legged dogs, satirically named Lefty and Tripper, said he supports the ban but also shops outside of Laguna, so the ban won’t reduce his supply that much.  Wright, an economist, said he’s studied the financials and the science of plastic bags.  He said the dog waste actually helps break down the plastic due to the similarity between the methane gas released and the hydrocarbons of the bag.  “But we need to get to the point where we eliminate them altogether,” he said.

Wright agrees with environmentalists that livestock methane is a major culprit in climate change and burying pet waste is a better idea. He said he has found places in the U.S. and abroad that collect pet waste from the trash and use it to produce biofuel. He’s used it as fertilizer for a large garden at his previous home in Atlanta.

McCamant, who owns three Huskies, is ahead of the curve.  Out of necessity, she said she uses stronger, biodegradable waste bags she purchases from a pet shop. She tries to restrict a single walk with her three dogs to one bag, maybe two.  “I try to use it to its fullest capacity, if you know what I mean,” she commented.

Burying the dog’s waste and letting it decompose as fertilizer has its limits in Laguna, McCamant said. “You have to have somewhere to bury it,” she said.  Picking up your dog’s waste and carrying it back to the backyard to bury it, she surmised, “is more trouble than people want to go to.”

Paige Strayer, a professional dog walker for five years, said she weaned herself off the grocery store variety of plastic bags because they’re too big.  She uses the smaller, preferably biodegradable and free litter bags dispensed by the city along the Main Beach boardwalk, at city parks and on open space trails and at the city dog park on Laguna Canyon Road.

“We may need the city to put more around so they’re more accessible,” said Strayer, who walks an average of seven dogs a day.  She added that she’s happy about the ban and already uses reusable grocery bags. Cat owners say they may find the lack of readily available plastic grocery bags more challenging because the bigger bags are more conducive to emptying a litter box.

The ban intends to keep the ocean and environs freer of polyethylene debris.  If unopposed by the persistent Save the Plastic Bag coalition, it will become effective locally on Jan. 1, 2013, when customers will be encouraged to bring their own shopping bags or pay 10-cents to take a paper one.  The coalition, which unsuccessfully attempted to prevent Manhattan Beach from banning plastic bags last year, is pursuing the legality of cities banning local restaurants from providing plastic carry-out bags, according to city attorney Phil Kohn.

Laguna Beach stores will be required to provide customers with reusable canvas bags for sale or paper bags made with at least 40% post-consumer recycled material at 10-cents apiece.

The city’s ban exempts the smaller plastic bags dispensed for fruits and vegetables in grocery stores and at the farmers’ market.  The council also approved spending $5,000 to educate the public about the adverse effects of using plastic bags and the preference of reusable, recyclable and biodegradable non-petroleum-based varieties.