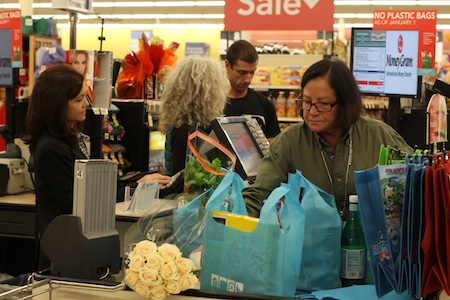 In an environmentally conscious move akin to the city’s ban on polystyrene containers in 2008, an ordinance mandating the use of reusable bags in Laguna Beach went into effect on Jan. 1.

As a result, virtually all Laguna retailers are prohibited from providing so-called single-use plastic bags to customers and, furthermore, required to charge 10 cents for each paper bag requested by customers.

Laguna joins 45 other cities and eight counties in the state in adopting similar bans in recent years, according to the website Campaign for Recycling. In Orange County, Dana Point also enacted the prohibition, which will take effect in April. Cities in 13 other states also ban their use, the site says. San Francisco became the first city in the nation to adopt a ban on plastic shopping bags in April 2007.

Consequently, Laguna merchants are encouraging shoppers to bring their own reusable bags and one local market in recent weeks began dispensing free, washable ones to customers buying $30 worth of groceries.

Even so, there are some exemptions from the new rule. Restaurants and those that provide take-out and food trucks are exempt from the plastic bag ban, though many have already made the switch to paper. Essentially, only prepared foods are subject to the ordinance. A related exclusion is the plastic bags intended for produce and meat and poultry, which are allowed in markets.

Laguna’s City Council adopted the ban at the recommendation of its environmental committee and passed the ordinance last February, allowing retailers time to prepare for the new law.

Ralph’s began reminding its customers during the Thanksgiving weekend that they would soon have to either bring their own bags or pay for paper ones with their purchase. Managers started phasing out all plastic bags from the store, eventually running dry not long after Christmas. The plan was modeled after a similar shift in other towns such as Santa Monica, and employee training was already in place for the 10-cent per bag charge. “I expect the transition to be smooth and fast,” assures Marty Skahill, the local store’s front-end manager.

Skahill admits that some of the affluent and eclectic customer base may flaunt the law, but that most people are conscientious about bringing their own bags and so it should become habit.

In recent weeks, Albertson’s checkers have offered customers a free, sky blue reusable bag with each purchase of $30 or more to educate customers, and will continue through Tuesday, Jan. 8.

“Most people bring in their own bags anyway,” says manager Mike Harrell, though he anticipates more customers will do so to avoid the 10-cent charge.

“Retailers are allowed to keep the 10 cents for their own use,” explains Mike Phillips, the city’s liaison to the environmental committee. The ordinance’s intent is to halt what he described as a “proliferation” of plastic bag litter in storm drains. “There have been instances of marine mammals ingesting plastic products,” Phillips says.

That contradicts the findings of Chip McDermott, who founded the anti-litter organization Zero Trash that recruits volunteers for monthly beach and street cleanups in Laguna, Newport, and Dana Point. He rarely finds plastic bag litter. “But if you go further north,” McDermott goes on, “to, say, Huntington, you’ll find more plastic bags. There just isn’t that much here.”

Others dispute the ordinance’s environmental impact. “Paper bags are a worse environmental option at checkout, using a large amount of water and emitting more greenhouse gases than plastic bags,” said a statement from American Progressive Bag Alliance, a Washington D.C. based special interest group that represents plastic bag manufacturers around the country. Reusable bags are hotbeds for bacteria and are not a sustainable practice due to their inability to be recycled, the organization pointed out, noting that they are mostly made and imported from China.

Taco Bell, on the other, is exempt from the new rule. The fast-food operation plans to continue using plastic bags until further notice, said manager Chris Andrews.

Those who don’t comply will be subject first to a written warning followed by an option for fines, Phillips said.