With guns drawn and an eye on its sight, it was hard to know from the stone cold faces of Laguna Beach police officers that Wednesday’s active shooter drill at the Laguna College of Art and Design was just practice.

“This is the type of training all law enforcement should get,” Sgt. Jim Cota said. “It keeps you sharp and prepared for what could happen.”

Over 100 police officers and first responders from Laguna Beach, Costa Mesa, Newport Beach, Irvine and UC Irvine took part in an active school shooter drill staged at LCAD, where school is not in session and still in winter recess. First responders, members of the Community Emergency Response Team (CERT) and some participating students and staff from LCAD all arrived to the campus to surprise staged scenarios involving an active shooter. Each team was told to use their training and respond appropriately in their given roles. 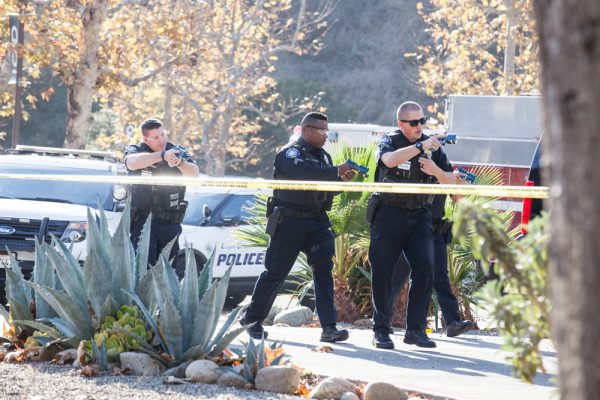 “We had some scenarios that had a few casualties, multiple casualties, some that had people screaming and walking wounded,” said Laguna Beach emergency operations coordinator Jordan Villwock. “We were able to change up the scenario each time and keep them on their toes. “

Participating LCAD staff and students and CERT members, like Janice Hayden, played a big role in the exercise, posing as casualties and panicked civilians.

“I got a better feel for what happens during an active shooting incident and what as a civilian you should do,” Hayden said. “Run, hide, and fight back depending on where you are.”

Though gunfire was heard, officers were only firing blanks. They did not use tear gas or other weapons in Wednesday’s 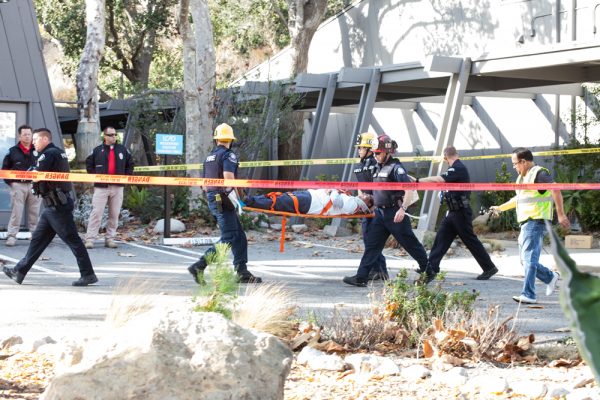 exercise. Paid for with one of five urban area security initiative grants awarded to Wildan Homeland Solutions for Orange County, the drill is valued at around $10,000.

“This training is paramount for law enforcement, for Laguna Beach police and agencies involved in our region,” Cota said. “It gives you that chance to sharpen everything, your emotional tools, your skills and your physical abilities.”

For many on the scene, the drill was a sobering reminder that school shootings can and do happen anywhere, so being prepared is critical.

“It really could happen here.” Hayden said. “It’s easy to think this is a beach side town and it couldn’t happen, but it can happen here.”