By Daniel Langhorne, Special to Independent

Rouda received 94,835 votes to Rohrabacher’s 91,233 votes as of the Indy’s deadline, separating the two candidates by just 3,602 votes. Standing at the podium late Tuesday night with his wife Kaira and their four children, Rouda said his journey to victory started with the election of President Donald Trump in November 2016.

Among the other issues on the local businessman’s political platform were championing healthcare as a human right, achieving a meaningful solution to end gun violence, and reforming campaign finance laws. 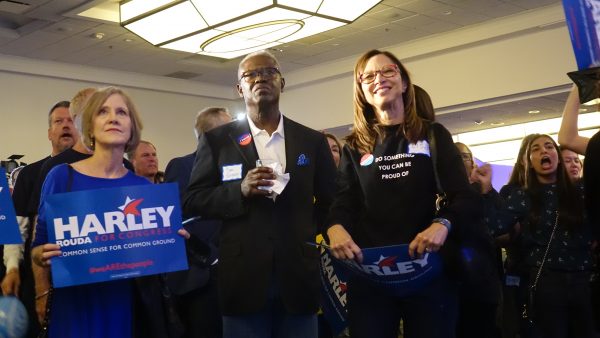 The National Democratic Committee saw winning Rohrabacher’s seat as vital if it wanted to take control of the House of Representatives, a goal it successfully met by winning dozens of seats across the country. Rohrabacher said to supporters Wednesday that the Democrats and their supporting special interests spent $20 million on trying to oust him.

“Orange County is not something that can just be bought,” he said. “We’ve had billionaires coming in from outside. We’ve had people pumping in money so that they can bring people in from Los Angeles. And with that being said, any other area that wasn’t as committed and the people weren’t as committed to the ideals of our country and those ideals of the Republican Party, it would have been a lot worse.”

Rouda was able to pull ahead of the veteran congressman by carrying most precincts in Laguna Beach and Costa Mesa. He also took some precincts in Huntington Beach that have previously gone for Rohrabacher. Newport Beach solidly remained in Rohrabacher’s corner.

The Registrar of Voters reported Wednesday that it still has at least 418,000 ballots to count that were vote-by-mail, provisionals, election day paper ballots, or conditional voter registrations. It’s uncertain how many of these were from the 48th Congressional District.

Rohrabacher did not concede as of Wednesday and his spokesperson said it was still too early to announce whether the incumbent congressman would request a recount in this extremely close race.

“The Registrar is still counting ballots,” Andrew Eisenberger, a Rohrabacher campaign spokesman wrote in an email. “There are more than 80,000 left to count. We aren’t at the stage where a recount would be requested.”

“I thought the Parkland [High School] kids had an opportunity to make a change and I was really disappointed that it fell flat,” Hadden said. “I’m hoping that Harley and these Democrats that are being elected will restore some sanity to Washington.”

Newport Beach psychiatrist Lesley MacArthur said she was deeply troubled by Rohrabacher’s support for the Trump Administration’s recent hardline measures against illegal immigration, such as separating undocumented children from their parents.

“That’s the sort of thing a child can never forget,” she said. “It’s just inhuman to do that. We don’t need to explain why that’s wrong.”

Phyllis Mandel, of Corona del Mar, was also concerned about climate change and believed Rouda would help preserve a livable world for her children and grandchildren.

Rouda closed his remarks for the evening by thanking his family and volunteers for their help in getting him to the finish line.

“We’re on this journey with you because we all care so much about our children and grandchildren and the world we’re going to leave them,” he said. “They remind us every day of how important it is that we get up and fight every day for what’s right in our country.”