Laguna Beach lifeguards on Monday deployed a city tractor to haul away a sailboat that ran aground near Main Beach the previous day.

The owner of the 36-foot Catalina, San Diego resident Stephen Michael Fryer, 47, was arrested and released Sunday for suspicion of boating while intoxicated, according to police Sgt. Louise Callus.

He joylessly and silently watched the recovery from shore Monday.

Why Knot, with its engine running and its sails furled, grounded at Cleo Street Beach around 3:38 p.m. on Sunday, Callus said.

He initially refused to comply with directions to exit the boat’s cabin, Callus said.

An attempt by the Harbor Patrol to tow the vessel out at high tide on Sunday night was unsuccessful; the tow line broke and the effort possibly cracked the boat’s keel, buried in sand. “It was deemed unseaworthy,” said Trager, who the next day re-directed removal efforts to by using a back-hoe tractor to unearth the keel and a chain to tow the boat temporarily to higher ground at the north end of Main Beach. 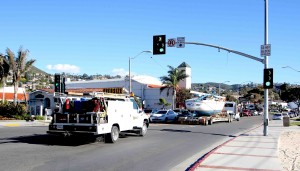 The owner could not afford to remove the boat, Trager said. Nor did he want it any longer, Callus said, due to damage that occurred during the grounding and from the waves overnight. Ownership was assigned to the city, she said.

Fryer, the sun-burned owner wearing a “Why Knot” hat, watched the salvage operation from a nearby rock, declining to answer questions.

He told fellow boat captain and Laguna resident Susie Campbell, who also stopped to watch the recovery effort, that he was en route to Catalina from San Diego, a trip he told her he had made before. Campbell said he didn’t discuss why he ran aground. 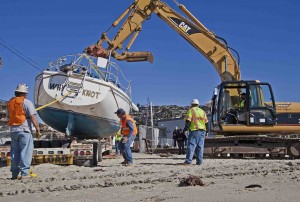 The boat’s rigging and safety equipment appeared to be in good shape, even though the keel was cracked, Campbell observed.

Prior to the boat’s removal, a private environmental contractor hired by the Coast Guard extracted 15 gallons of diesel fuel from its engine and about 700 gallons of oily salt water from the bilge, Trager said. Workers broke out the cabin’s starboard windows to insert pumps.

Unlike neighboring cities to the north and south, Laguna generally is a transit point for pleasure craft as it lacks a pier or permanent offshore moorings. When vessels do come ashore, they are typically in trouble or attempting a surreptitious landing.

And in 2011, abandoned panga-style boats suspected of carrying human cargo were found at Crystal Cove and Emerald Bay.

“It’s not uncommon, but it’s a major problem,” Dana Point sailing instructor, Capt. Mark Howe, said of the beached boat. If the boat spills fuel or starts breaking apart, Laguna would have an environmental nuisance to clean up, he said.