In the midst of chaos and poverty of India, five Laguna Beach travelers recently received an abundance of individually tailored gifts: glimpses into the nature of the divine, insights about themselves and the realization that the West can learn much about living well from the people of the Third World.

The group wishes to share their “Spiritual Tour of India” with a slide show, discussion and Indian meal on Sunday, April 29, beginning at 6 p.m. at Laguna Beach’s Neighborhood Congregational Church at 340 St. Ann’s Drive.

Visiting six high energy spiritual centers, and spending most of their time with the people who live there, the group got an inside look into lifestyles rooted in spirituality stemming from a variety of religious traditions.

For trip leader Tenpa Dorjee, the journey retraced his childhood path – from the desolate refugee camp his parents were sent to after fleeing Tibet, to the orphanage where he was raised, to  Dharamsala, home of the Dalai Lama and the Tibetan Government in exile for which he worked for two years.  For Dorjee, owner of Laguna’s Tibetan Handicrafts, the trip was “a dream come true. I got to share my personal life before I came to the United States with my friends.”

For Pam Wicks, the church’s music director, longtime yoga practitioner and student of Buddhism, the religious smorgasbord and spiritual focus of the trip was a perfect fit. Whether visiting a Buddhist monastery, attending a Hindu puja on the banks of the Ganges in Rishikesh, or a Bahai temple in Delhi, “we always took time to feel the spirit of the place,” Wicks said. “We spent quite a bit of time in meditation in very powerful places.”

For Julien Kheymour who has been traveling to India since his mother took him with her to meet her guru, the country allows westerners to experience “a spiritual way of being that helps people lead a better life that people there have known about for centuries.”

At the first stop, Auroville, a world meditation center in Southern India where 2,000 people of varying faiths from 44 countries are endeavoring to live harmoniously, participant Everett Hoffman, had a truly mind altering, revelatory experience. While meditating in the township’s massive, golden domed mediation center, “it was the first time I considered myself as a spiritual being,” Hoffman said. “And my path was illuminated. I saw what is that I was meant to do.”  Since returning home to Boston, the 23-year –old college graduate has connected with people involved in composting and has landed three jobs in the field.  “I got so much inspiration and energy from that trip,” Hoffman said.

After a 12 hour train ride and three-hour drive, the group arrived at their second stop – Bhandara Tibetan Refugee Settlement – in one of the poorest, most desolate areas in India.  With summer temperatures hitting 120 degrees in the summer, and a severe lack of infrastructure, the community of 700 Tibetan refugees and the nearby monastery has difficulty being self-sustaining. Yet art restorer, Susan Brown Madorsky, was moved by the Tibetans who call the inhospitable place home. “They were the warmest, most inviting, peaceful people,” she said. “We were invited to tea in the middle of nowhere. They had nothing and despite unspeakable tragedies, they were smiling and generous”.

And after a night spent eating and making music with the monks at the local monastery and bedding down on a board and blanket, Wicks said, “I had the best sleep there that I had in India. I think it was because the place was filled with love and devotion.”

The event is free, open to all and sponsored by the Fellowship Ministry at N.C.C. Any donations received will be used to fund future projects related to education, health and community sustainability. For more information contact Pam Wicks at 573-7104 or Tenpa Dorjee at 715-1043. 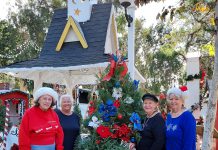