A 56-year-old visitor was injured when struck in a crosswalk by a vehicle turning at Cress Street onto Coast Highway about 1:10 p.m. Monday, Sept. 16, police said.

Portions of Coast Highway were temporarily closed as a result of the collision and following accident investigation. No citation was issued, pending the outcome of the investigation, said Sgt. Louise Callus.

The woman from Medford, Ore., was transported to Mission Hospital in Laguna Beach with a complaint of pain to her left hip and leg, Callus said.

She was struck by a 59-year-old motorist, a Laguna Beach resident, who was traveling at slow speed but failed to see the woman crossing as he turned left into southbound lanes, Callus said.

Laguna Beach Police Department will be deploying this weekend to stop and arrest alcohol and drug-impaired drivers in the Department’s ongoing traffic safety campaign.

Patrols will deploy on Friday, Sept. 20, after 6 p.m. and until 3 a.m. in areas with high frequencies of DUI collisions and/or arrests.

Robbery. 800 block of Coast Hwy. 10 a.m. Nazzee Jahansouz, 54, of Laguna Beach was arrested for suspicion of robbery. Police searched the area for a woman dressed in black wearing a white wig that had snatched a $125 silver necklace from the neck of a hotel guest. Jahansouz was located a few blocks away allegedly in possession of the necklace. Bail was set at $100,000.

Structure fire. 1500 block of S. Coast Hwy. 5:15 a.m. A fire behind one of the stoves in a fifth-floor kitchen was doused in part by turning off gas.

Vandalism. 31300 Coast Hwy. 7:33 a.m. Sometime in the last week an unknown suspect cleared vegetation on the property without permission.

Stolen vehicle. 600 block of Coast Hwy. 10:31 a.m. Someone stole keys left with a valet and took a U Haul pick up truck, discovered later in the week in Sacramento.

Grand theft. 3200 Rimcrest Circle. 12:46 p.m. A ring and bracelet valued at $1,600 were taken from a home, related to another investigation involving a housekeeper.

Stolen vehicle. 2100 block of Laguna can yon Rd. 12:52 p.m. A suspect used a fraudulent credit card to rent a car, which was not returned but recovered later in the week in Downey.

Domestic violence. Canyon Acres. 2:08 p.m. Andrea Patricia Mazzola, 46, of Huntington Beach, was arrested for bench warrants and Michael Jon Schuler, 43, of Irvine, arrested for suspicion of a controlled substance and paraphernalia. Bail was set at $20,000 for him.

Grand theft. 1400 block of Mar Vista Way. 9:48 a.m. A resident suspects day laborers in the theft of $3,000 worth of jewelry sometime between May and June.

Grand theft. 2 p.m. A wedding ring valued at $2,100 was taken from a home during a pool party two weeks ago.

Traffic collision. 600 block of S. Coast Hwy. 5 a.m. Michael Babayans, 27, of Laguna Woods was charged with suspicion of felony DUI after attempting to flee a collision with a parked vehicle. He also ran from police by jumping a fence onto a fenced patio 15 feet below. The current arrest is his fifth in 10 years. Bail was set at $50,000.

Fire. Laguna Canyon Rd. 3:28 p.m. 4:24 p.m. Passersby helped knock down a brush fire with extinguishers and were trying to stomp out the blaze when police and fire arrived on the northbound side of 133 north of El Toro Road. Flames were about three feet high and covered a 15’ x 40’ area, Sgt. Louise Callus said. The canyon was closed temporarily as fire fighters doused the blaze.

Traffic collision. Temple Hills. 11:22 p.m. A 30-year-old intoxicated pedestrian wearing headphones and texting while crossing the roadway collided with a vehicle driven by an elderly female. The pedestrian was transported for medical aid to Mission Hospital in Mission Viejo.

Shots fired. 1500 block of N. Coast Hwy. 5:09 p.m. The occupant of an apartment set an airsoft-type product to blast as a joke.

Reckless driving. 300 block of Park Ave. 11:41 a.m. Serina Cardenas, 23, of Los Angeles, suspected of reckless driving, was arrested for numerous other charges and held for $20,000 bail.

Fire. 3200 block of Alta Laguna Blvd. 6:46 a.m. Three citations were issued to people who lit sparklers in a trashcan next to the Alta Laguna water tower. 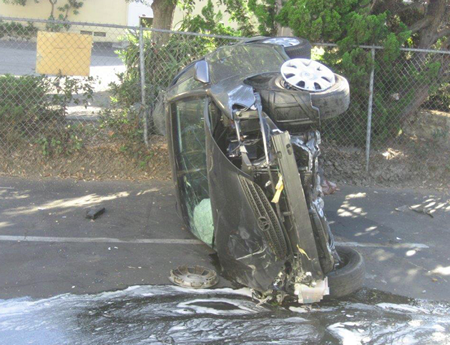 Traffic collision. 2900 block of Laguna Canyon Dr. 4:47 p.m. A 77-year-old Laguna Beach woman suffered a fractured elbow and was extracted from her vehicle by police Saturday, Sept. 14, after it had rolled three times. The driver failed to make a curve and her vehicle left the road and struck a large rock, which caused the car to corkscrew. While the car was airborne, it struck a water main and a natural gas meter and slid past several pomegranate trees before stopping in a driveway at 2975 Laguna Canyon Rd.

Police arrested Michael Carr, 43, of Long Beach for suspicion of DUI on Wednesday, Sept. 18, responding to a report of a single car collision. The driver escaped without injury after driving off the road, overcorrecting and crossing into oncoming traffic lanes before colliding with the curb and hillside.