His paintings hang in major museums, including the Laguna Art Museum, and countless galleries specializing in historic California art. A weighty tome titled “Edgar Payne: The Scenic Journey,” published by the Pasadena Museum of Art, chronicles his life and artistic oeuvre centered on the majestic ranges of the High Sierra, travels to Europe and the Southwest where he portrayed the region’s Native Americans.

In 1918, Payne made his home in Laguna Beach where he founded the Laguna Beach Art Association, which later became the Laguna Art Museum, one of the county’s earliest cultural institutions.

Self-taught, the artist is best known as a plein-air painter, who supported his family in part by painting murals on commission.

Yet, his murals have received relatively scant recognition in scholarly works. “Scenic Journey…” mentions a 21-canvas series of murals depicting American historic tableaux created for the American Theater in Chicago and eight murals for the Hotel St. Paul in Los Angeles, which included the acclaimed “Covered Wagon,” evidence of his spiritual connection to the desert and canyons.

The four that he painted for the now closed Laguna South Coast Cinemas hardly received any scholarly recognition at all. Local Payne experts such as Irvine Museum director Jean Stern and Ray Redfern, proprietor of the Redfern Gallery, were unfamiliar with the theater murals.

Even so, a local historian expressed concern over the state of the Payne murals commissioned by the Aufdenkamp family, the theater’s founders. “They have been hidden from view and been allowed to deteriorate after it had been remodeled into a double-screen facility in 1976,” Laguna Beach historian Jane Janz said this week.

The theater’s owner, Leslie Blumberg, of New York, said in an email this week that two of the four murals had remained at the theater since they were hung 70 years ago and one went missing and has not been found. The fourth has been returned by the Laguna Art Museum and is currently in storage. “Unfortunately, the murals in the theatre have been badly damaged,” said Blumberg, who recently engaged a conservator to assess the damage and determine if restoration is possible. Even though the job was deemed complicated, restoration seems possible and Blumberg said she approved it.

Janet Ruggles, executive director of The Balboa Art Conservation Center, which specializes in art and artifact preservation, declined to comment on the Payne project without Blumberg’s permission.

Theater manager Bob Lively said that the remaining murals were taken down more than a month ago. He said holes for speaker brackets had been drilled into them but otherwise declined to comment on their condition. “I am not an art person,” he said.

A black and white vintage photograph shows arched and rectangular murals painted on canvas and framed in stucco adorning a still undivided cinema. Roughly four by eight feet in dimension, they are chronicling Vasco Núñez de Balboa’s discovery of the new world. “Payne had submitted several design possibilities, and the family chose four,” said Janet Blake, the museum’s curator of historical art. Blake said that the image titled “Discovery” shows Balboa’s discovery of the Pacific Ocean, but was reticent about disclosing how the museum came into its possession.

Marti McVey, a former resident who now lives in Scottsdale, Ariz., surreptitiously took photos of the murals beneath theater curtains in January 2014. She sent the images to elected officials and local art institutions, trying to fan community interest in their restoration. “And nothing…at all,” she said. 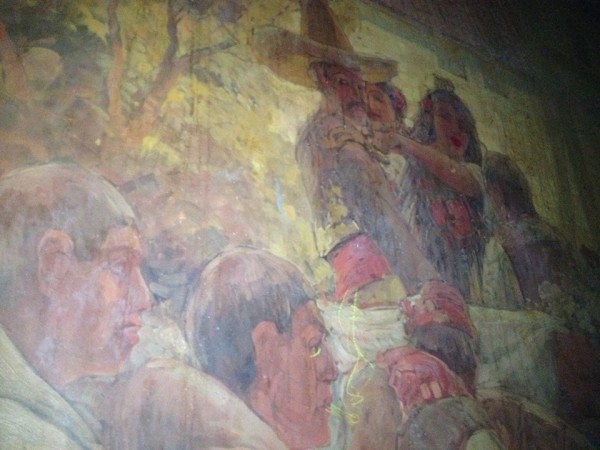 The theater had been operated by the Regency chain and its president Lyndon Golin said the murals were kept behind curtains and not visible to the public. “I am not sure what condition they were in,” he wrote via e-mail.

Blumberg also wrote: “When the restoration is complete, I hope to create an opportunity for the citizens of Laguna to see the murals, unusual paintings by one of our city’s and California’s foremost artists.”