An Upland woman suffered a leg fracture when she was trapped against a light pole as a result of a 2:30 p.m. collision that closed Coast Highway last Friday, police said.

The accident at Coast and Cress Streets involved two vehicles colliding head on as the driver of a southbound vehicle attempted to turn left on a yellow light, anticipating an oncoming car would stop, police Sgt. Louise Callus said.

The impact propelled the northbound vehicle onto the northeast sidewalk, striking a pedestrian, who suffered a fracture to her left leg and was pinned between the vehicle and a light post, Callus said.

The driver of the northbound car, a male from Laguna Beach, suffered mild injuries and refused treatment by fire personnel, Callus said. A bystander said his arms were scraped, possibly by the car’s deployed airbags. 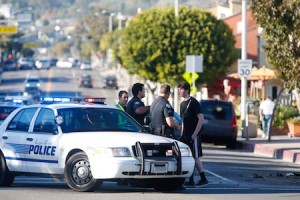 The second vehicle’s driver, a woman from Lake Forest, was knocked out by the collision, Callus said. After she regained consciousness, she was transported to Mission Hospital in Mission Viejo for treatment, as was the pedestrian.

The force of the collision spun around the southbound vehicle, which came to rest northbound in northbound lanes, Callus said.