Besides personally recruiting the critically acclaimed Grammy winner to Laguna, Goldstein also steps into the limelight with this concert in a new role as television producer, having struck a deal to film the show for rebroadcast locally by PBS-So Cal (formerly KOCE Public Television). Goldstein hopes the program is good enough to win nationwide distribution on some of Channel 10’s 355 PBS affiliated stations and continue to raise Laguna’s profile as well as that of Laguna Beach Live.

With the Childs’ concert as a foundation, “I hope to begin bringing back what’s been missing in TV: first-rate entertainment,” said Goldstein, a 33-year Laguna resident and board member of the former KOCE TV and Irvine Barclay Theater. After hearing Childs on YouTube, Goldstein resolved to bring him here. “What I saw and heard was a screaming talent,” Goldstein said.

To that end, Goldstein turned to fundraising to bankroll the filming on Saturday. Neither Goldstein nor others were willing to discuss production costs, except to say  contributors have been generous. Some production participants also donated time and effort.  “Cost to produce a show such as this depends on countless variables such as location, copyright questions and editing time, so, on the low-end a show like this could be produced for as low as $75,000 or go to $200,000. It’s almost impossible to put a ballpark figure on productions,” said Suzanne Jurva, of Atlanta, Ga., an independent filmmaker not involved in the project who has produced PBS programs.

“The art lies in putting together enlightening entertainment without going broke. We use our eyes and ears to bring things to the next level and keep thinking,” said Goldstein.

Prewitt describes Goldstein as a visionary. “Whenever we think he’s dreaming, we wind up doing it. He takes what people think can’t happen and makes it happen,” she said. 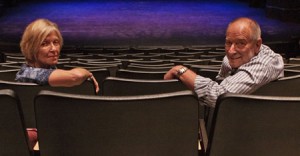 PBS So-Cal committed to broadcasting the program locally, said station manager Ed Meskovich. “Sam self-financed the program with his group and presented it to us as a free program. We do not buy or pay for indie programs,” he said. “We are in no position to help with production but will broadcast once we review specifications. We are taking it one step at a time,” he said. He added that the show is slated to run at an unspecified 11 p.m. Saturday time slot, which would peg the cost of air time at $3,500 to $4000.             Goldstein, 76, teamed with veteran videographer Jeff Cole, who had produced other programs for PBS SoCal and Chapman University’s Panther Productions.

Cole envisions the Childs production as a live, multi-camera shoot, which will then be formatted by the team, including stage manager Steve Baker and the artist, into an hour-long TV presentation. “I speak Sam’s artistic language and he does mine, and together we just get it,” said Cole, 32, who is also a musician.

Irvine Barclay Theater director Doug Rankin praises Goldstein as financially generous and a tireless promoter of the arts and art education. “Be it at lunch or at a board meeting, Sam brings passion to everything–art, education, architecture. He gets his ideas through,” he said.

Among the local ideas he pushed through with the help of the late hotelier Claes Andersen, Visitor’s Bureau president Karyn Philippsen and lobbyist Paul Freeman was passage in 2001 of a Business Improvement District tax. The 2% addition to the mandatory hotel bed tax provides welcome annual subsidizes to Laguna arts organizations, including Laguna Beach Live. He also coaxed along the years-long restoration and remodel of the historic 1930 Heisler Building, whose tenants includes a Tommy Bahama retailer and restaurant and Rock ‘N Fish restaurant.

Discovering drums as a boy, Goldstein played on television shows with celebrities such as Lucille Ball, Frank Sinatra and Gene Kelly. He also drummed for the Flying Burrito Brothers, the Nitty Gritty Dirt Band, Merle Haggard and Buck Owens.

He still regrets the gigs that got away. “I got a call to play for Elvis Presley but my answering service lost the message,” he recalled. And, he turned down a gig with Barbra Streisand. “I just didn’t think she was going to last.”

Only 43, he retired and moved to Laguna in ’78. “Lucy retired, Desi died and the scene was just not the same,” he recalls. He moved into real estate when a neighbor spotted him $20,000 to invest in a Beverly Hills building. The pay off was enough to warrant a lasting career. “Cleaning and flipping. It was all a matter of timing that you can’t do in today’s economy,” he said.

Regardless, these days Goldstein seems more engaged in music than real estate. “I love to wake up in the morning and thinking of which way I can push the envelope next,” he said.