By Justin Swanson, Special to the Independent 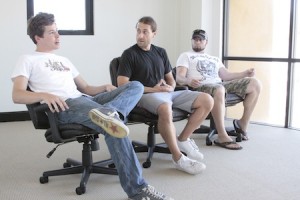 It was a three-man job setting up the omni-directional broadcast antenna above the rented suite at 1833 S. Coast Highway, requiring slight adjustments to the left and to the right, up and down until the signal was set.  One person tweaks the direction of the antenna manually. Another mans the power so as not to fry the other.  The third drives the coast testing the aural transmission in a car. It is a matter of trial and error, testing the unknown against the best guess and hopeful experimentation.

Into unfamiliar space go the coming radio waves of KX 93.5, Laguna Beach’s only low-power station that expects to premiere beginning Oct. 15.  The men in charge, the hopeful signal experimenters, are not assuming the airwaves unknowingly.  “You don’t see the kind of high profile experience with a low-power, local station,” explains Laguna resident Tyler Russell, program director.  “We’re giving people the ‘real deal’ in a small package.”

Their idea for KX 93.5 is simple.  There is a city with maddeningly difficult-to-tune signal-reception points that is, too, inclined to its own local issues and news.  Give them music to listen to and a platform for community-related discourse.

Russell complains about corporate-driven stations that are “more about personality when they should be about the community” and a reflection thereof.  “We want to change the trend in FM radio,” says Russell, who intends a sonic palate not bound by record labels or prescribed playlists. The three DJs agree on their own music catalogue for the station (genre: classic to contemporary alt-rock) as well as the notion that radio should be for and molded by its listeners, their desires and needs.  Hence the station’s inclusive after-hours format, enabling volunteer locals to host their own shows. They hope to recruit 20 to 30 volunteers, supplementing their own programming.

So far music promoter Rick Conkey, Friendship Shelter executive Mark Miller, and singer-guitarist Jason Feddy are slotted to host shows after the daily stable runs out at 7 p.m.  Conkey, for instance, means to provide a platform to give local musicians exposure. His show will also feature in-studio performances and interviews of local artists.  For Conkey, hosting a radio show will be an all-new experience.

The challenges facing 93.5 are fundamentally similar to those of bigger stations in bigger markets, though they are more acute with a limited audience, said Rick Jackson, general manager of Atlanta’s Lincoln Financial Media, which operates 15 stations, including three in San Diego. “You’re still challenged to find funding, but you’re limiting your opportunity with a smaller radius.”

The working needs of a smaller station are the same: people to manage programming, administration, sales, promotion, and engineering – tasks otherwise divvied up with greater resources, he says. “It all comes down to your budget: how much you’re willing to spend and willing to lose.  But they have to get listeners first,” Jackson says. He recommends 93.5 keep their broadcasts “extraordinarily local” to provide a specific niche within to operate.

The station, as is true of all those low-powered, is technically classified as a nonprofit, a donor supported “local community initiative.” So far, the station has yet to attract underwriters but has an operating budget of $200,000.  Thus far in its startup, the station has been privately funded by the families of the DJs, though starting now it is on its search for underwriters and donations to keep the station afloat on a month-to-month basis.

Among its board are Jim Click of Irvine’s Tuttle-Click Ford Lincoln and Jerry Price, dean of students at Chapman University.

Along with the requisite broadcast equipment, KX 93.5 needed to attain licensing for its library of songs, though those fees are lower on account of their low-powered standing.  Too, the station had to clear itself with the FCC, finding an existing license (the frequency) and determining the location of the transmitter.

“I want to be the go-to media for people who live here for public affairs and breaking news.  I want to generate mass appeal without being corporate. And I want visitors to know they can pick up a station when others fade out on their way through the canyon,” says Russell.

“It’ll be community focused so there’s no reason not to have fun and to keep it moving,” adds Kaczor.

KX 93.5 begins broadcasting contemporary-to-classic alternative rock on Oct. 15, replete with a ribbon cutting ceremony at 3 p.m.  An iPhone app is in the works and online broadcasting is assured.  Visit kx935.com.