In the South Coast Water District, which serves South Laguna and other south-county cities, customers cut use by 33 percent, says board member Wayne Rayfield.

“While many of our customers have made a significant effort to reduce their water use, there is still more to be done if we hope to meet our 200 million gallon target,” Renae Hinchey, general manager of the Laguna district, said in a statement. “It is critical for residents to be diligent in reducing their daily water use to avoid possible drought penalties.”

In Laguna, to achive its 24 percent reduction target, every resident must cut their water use by 29 gallons per day, the statement says. Since at least 70 percent of daily water use goes towards watering yards, the greatest opportunity for savings simply comes from using less water outdoors.

District customers that exceed their water budget could face additional penalities for each unit of water used.

Mandatory water restrictions in effect since June 1 limit Laguna customers use of sprinklers to 10 minutes on Monday and Thursday; South Coast asked customers to curb watering to once a week. 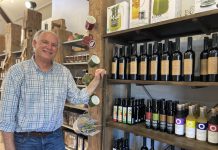 Even During Shutdown, a Daily Dose of Spice