Pennsylvania mining heiresses Blanche and Florence Dolph chose the coastal foothills of Laguna and south Orange County as the focus of their property investments in the early 1900s.   Blanche, the more prominent of the sisters, was not just an investor. While Florence lived in Los Angeles, Blanche made her home in Laguna Beach and then Dana Point and became part of the community, helping to found the Presbyterian Church in San Juan Capistrano and making major donations to the denomination’s church in Laguna as well.

Described as a talented musician, a missionary and philanthropist, Blanche’s interests in life were humanitarian and charitable, according to Samuel Armor’s 1921 “History of Orange County California with Biographical Sketches,” published by Los Angeles’ Historical Record Company.

One of the Dolphs’ last gifts is still a precious resource today. In 1935, shortly before Blanche died, the two sisters donated two acres of Aliso Canyon land to the Girl Scouts for use as a camp for Laguna Beach girls. In memory of their mother, the campsite was to be called “The Elizabeth Dolph Girl Scouts Camp of Laguna Beach.” More on this in next weeks edition.

Blanche and Florence Dolph were the daughters of Edward Dolph (1814-1890) and Elizabeth Kocher Dolph (d. 1898) of Scranton, Penn. Edward Dolph, a self-educated entrepreneur, began as a farmer. Then, in the lumber business, he prospered “beyond his most sanguine expectation” by selling timber to the expanding railroads, said author Horace Edwin Hayden in “Genealogical and Family History of the Wyoming and Lackawanna Valleys Pennsylvania, Volume II,” published in 1906 by The Lewis Publishing Company of New York and Chicago. 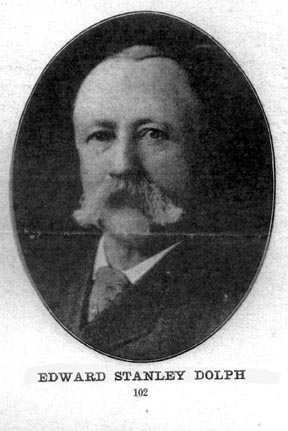 Turning his attention to mining, Dolph prospected and developed coal deposits and was one of the organizers of the Scranton Mining Company. He was also engaged in silver and copper mining near Lake Superior. Upon his death his wealth was distributed equally among his four children, Edward S., Florence, Blanche, and Josette.

Josette and Edward S. Dolph remained in Scranton and Edward assumed the responsibility of managing the family interests while Florence and Blanche found their future in California.

Blanche first visited the south county area in 1886. It impressed her and she would eventually make it the focus of her investments and her permanent home.

Beginning in the early 1900s, Blanche and Florence Dolph invested in hundreds of acres of property in the area now known as South Laguna.

In 1903 Blanche entered into an agreement with Priestly Hall, the owner of the former Leon Goff homestead of 153 acres, which extended from north of where West Street is today, south to Three Arch Bay. Blanche acquired half interest in the property for $700 and her agreement to pay taxes and ongoing expenses.

In 1905 Florence purchased the former Frank Goff homestead of 136 acres for $7,500. This is the area north of Aliso Creek, extending almost to where Nyes Place is today. That same year Blanche purchased 157 acres of hillside land from Nellie Goff for $1,000, “gold coin of the United States of America.” This property, part of Hobo Canyon and the mountainous area north of Aliso Canyon, remains mostly undeveloped to this day. Eventually their properties came to be managed together under the name, the Dolphin Company, Blanche ceding her interest to the company in 1935, and Florence in 1937, respectively, according to county property records.

As development came along, the Dolph properties were subdivided and became known as Lagunita, Coast Royal and Three Arches. As of the 1930s, the name Lagunita was applied to all of their properties north of Aliso Creek, not just the neighborhood still known as Lagunita. It included the areas now familiar as Blue Lagoon, Montage/ Treasure Island, Fred Lang Park, the market, Laguna Terrace mobile home park and the Hobo-Aliso neighborhood that includes Ocean Vista, Driftwood and Marilyn Drives.

Coast Royal is still the name for the neighborhood including Monterey, Brooks, Holly, Ceanothus and West Streets. Three Arches was developed as Tract 849 and is today known as the South Laguna Village.

Blanche was a dedicated member of the Scranton Presbyterian Church, where Lucilla McGaughey was assistant pastor. The two women became fast friends and when Blanche decided to visit the mission fields of India and China, she decided to take McGaughey with her. The two returned from China on the Oriental Steamship Company’s Chiyo Maru on June 3, 1912. McGaughey became her constant companion. Following the trip they both lived in the “pretty residence” at Arch Beach in the vicinity of Center Street, now Laguna Beach.

Taking advantage of her Dana Point properties, Blanche Dolph looked for a site to build an estate in which to spend her latter years. “She had traveled extensively throughout the United States and Europe, as well as the Orient, and her experienced eye enabled her to pick the site of her home on account of its beautiful view and natural beauty, commanding as it does a view of the broad Pacific as well as the beautiful San Juan Valley, while in the background are the Temescal Mountains in their grandeur,” Armor wrote in his account of county history.

In 1914 she completed a mansion in Serra, also called San Juan-by-the-Sea (now Dana Point) above McKinley Avenue (now Del Obispo Street). Named “The Dolphin,” this large home was the only such structure along that southern coastline at that time. The estate became famous for its gardens, especially since it was such a challenge to irrigate without having any established water system to draw on. Using a combination of cisterns to collect rainwater off the roof, and a pumping plant next to the creek, water for a vineyard, orchard, vegetables and ornamental garden was supplied. Self-sufficiency had to be considered in those days of remote supplies and poor roads, so this country house even included chickens and a cow, according to an account in the Los Angeles Times of Oct. 19, 1924.

Blanche died in 1936 at the age of 87, leaving her estate in the care of her companion, Lucilla McGaughey, and willing her sister Florence a rug and a picture. A lawsuit followed in which Florence charged that McGaughey “insinuated” herself into her sister’s life and by “nefarious designs” turned Blanche against her own family, The Times reported in April 27, 1936.

The Dolphin Company continued on with an expanded board of directors that included Florence. Rex Hardy served as president. The community of Lagunita was subdivided in 1938. The property that is now Montage Resort and Treasure Island Park had been leased as a trailer camp beginning in 1931. The rest of the land became subject to tax liens, and in 1943 the remaining Dolph land in South Laguna, 327 acres north of Aliso Creek, was sold to Dr. Paul and Marie Esslinger for under $20,000, according to a June 15, 1943 article in the Santa Ana (now Orange County) Register.

Blanche’s companion of 25 years, Lucilla McGaughey, lived at The Dolphin until her death in 1945. In the 1950s the property became Capistrano by the Sea hospital. When the hospital closed in the 1990s, the area was subdivided and named Bal Harbor. Due to the efforts of the Dana Point Historical Society the Dolph house was preserved. It has since been restored and is again a private residence.

Florence (1847-1949) returned to Pennsylvania and received international publicity when at age 101 she celebrated her birthday by sliding down a banister. When an article published in the Times of London questioned her sliding technique she explained that she slid astride, in the conventional manner, not side-saddle. Miss Dolph added, “Tell that editor to come on over. I’ll not only show him. I’ll teach him,” the Long Beach Press Telegram reported on June 5, 1948.

Next week’s article will trace the history of Blanche and Florence’s donated land, Camp Elizabeth Dolph, in Aliso Canyon.